Chris Lilley has created a new show and it's just about to drop on Netflix - on April 19!

Josie's Juice is a massive fan of anything Chris Lilley related and we have followed every single series he has created: 'We Can Be Heroes', Summer Heights High', 'Angry Boys', 'Ja’mie Private School Girl', 'Jonah From Tonga', and now... 'Lunatics'. 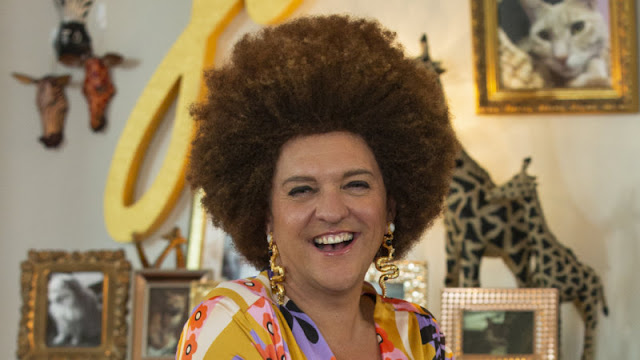 The Aussie comedian, who created alter egos including the OTT characters of schoolgirl Ja’mie King and drama teacher Mr G, will be seen again on screens, but this time, not free to air, instead 'Lunatics' will stream on Netflix from next week.

The new show is a 10-episode mockumentary and marks Lilley’s return to the small screen, five years after 'Jonah from Tonga'.

Lunatics introduces six new characters, all written and played by Lilley, including a South African woman called Jana, who is described as “a lesbian pet psychic to the stars who from her South African base struggles with an unrequited love for her personal assistant”.

Then there is Quentin, an “incompetent real estate agent” who dreams of being... a DJ.

Enter seven-foot-tall uni student Becky, and retail worker Keith who says his struggle with his “deep love for a cash register” is real.

Then there's Gavin, a boy destined to become the future Earl of an English country estate, and Joyce, a hoarder and ex-porn star.

Brace yourselves! Bring it.
Posted by Josie at 10:43

Email ThisBlogThis!Share to TwitterShare to FacebookShare to Pinterest
Labels: Australiana, Comedy, Controversy, Netflix, This Just In