Olivia Newton-John: reports she has 'weeks to live' untrue

Reports have surfaced all day (on January 2, Australian time) that singer and actress Olivia Newton-John, age 70, has 'weeks to live', but it turns out they are untrue.


According to this article on Radar Online, this is what their version of Olivia's prognosis is:

Ravaged by a spreading and incurable cancer, songbird Olivia Newton-John is clinging to life in the hopes she can see her only child, Chloe Lattanzi, marry in the new year!
“Olivia’s bodily functions appear to be shutting down, but she refuses to let go until she makes it through Chloe’s wedding day!” a source exclusively spilled to RadarOnline.com.
It continues:

“I refuse to die in a hospital room. I’ll go on my own terms, in our home and in my own bed — but not until Chloe says, ‘I do,’” the “Xanadu” star told a close pal.

BUT! According to this article this afternoon on news.com.au, those reports of Olivia's weeks long terminal state are untrue.


But those in the star’s inner-circle have told news.com.au that ONJ is A-OK.
An Australian source said Newton-John, famed for her role in Grease and a string of musical hits, is perfectly well and had enjoyed the Christmas and New Year period.
Her American representative Michael Caprio laughed when contacted by news.com.au, saying reports of his client’s imminent demise were “hilarious”.
“No she has not,” Mr Caprio said. “You might want to get better sources versus reading tabloids.”
It is believed  the Radar Online story followed a report in the US tabloid National Enquirer, which promoted a “tragic world exclusive” story late last month.
The headline read “THE END“Losing third fight with cancer; going home to die on her ranch.” 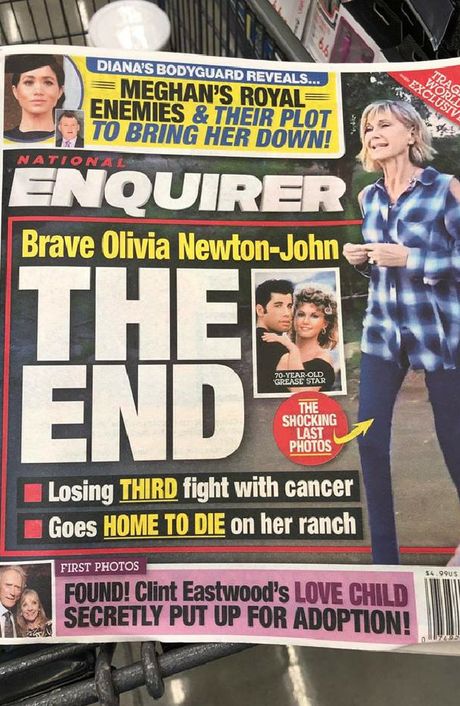