Forgive me if I took my time in writing this piece while I brought myself up to speed on this whole Jordyn Woods / Khloe Kardashian / Tristan Thompson saga... I am usually up on the whole Kardash / Jenner situazione but this one threw me because 1) I have other things happening in my life, and 2) I was researching that whole Momo Challenge thing... (you can read about that HERE).

ICYMI, Kylie Jenner’s former BFF Jordyn Woods (yes, that's right - try to keep up here) finally shared her side of the story - that is, that she moved in on her BFF's sister's partner (have I lost you yet?).

Sitting down with Jada Pinkett-Smith on her show Red Table Talk, Jordyn broke her silence on the Tristan Thompson cheating scandal. That hyper link right there is the WHOLE interview in case you want to watch it. 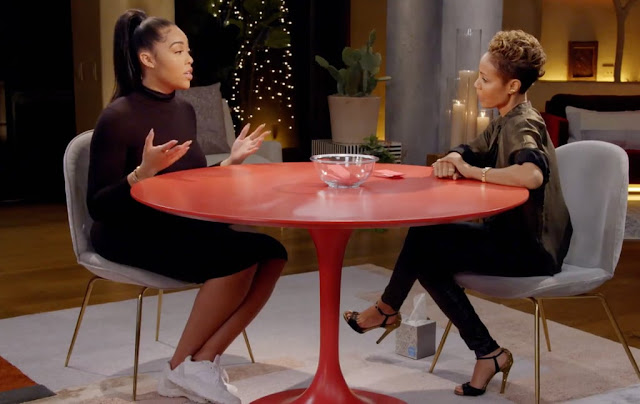 Why are you lying @jordynwoods ?? If you’re going to try and save yourself by going public, INSTEAD OF CALLING ME PRIVATELY TO APOLOGIZE FIRST, at least be HONEST about your story. BTW, You ARE the reason my family broke up!
— Khloé (@khloekardashian) March 1, 2019

Khloe went hard, accusing Jordyn of “lying” and berated her for going public as a way to “save yourself”.
Despite Khloe’s insistence that Jordyn hadn’t reached out privately to apologise to her, Jordyn told Jada the two actually had spoken.
“I did as much apologising as I could do over the phone, over text. Until I get the opportunity to apologise face-to-face,” she said.
Khloe disagreed: “You’re the reason my family broke up!”
But the model is adamant that’s not the case.
“I know I’m not the reason Tristan and Khloe are not together,” she told Jada during the Facebook Watch show. “This situation may have made it harder for her to want to be with him, and I understand that, but I know I’m not the reason.”
Khloe HAD been keeping quiet on social media since the scandal broke, but she quickly posted a second Tweet after fans questioned why she wasn’t savaging her partner and father of her child — Tristan Thomspon — on social media too. Then, she said:

Tristan is equally to blame but Tristan is the father of my child. Regardless of what he does to me I won’t do that to my daughter. He has been addressing this situation PRIVATELY. If Tristan were to lie publicly about what conspired,then yes I would address him publicly as well
— Khloé (@khloekardashian) March 1, 2019

In case you wanna know the details, Jordyn claims Thompson kissed her as she was leaving his house, but there was “no passion” and “no tongue” involved. She also denies spending the night with Thompson.
Adding to all the drama, makeup mogul and YouTube star Jeffree Star Tweeted his reaction to the interview with a video about “these idiots”, alleging that Jordyn and Tristan have been together for months.
Jeffree Star said: “Now what Khloe and Tristan need to do is shut the f*ck up, turn your iPhones off, and focus on coparenting.”
Whoa.

Learn to co-parent on a healthy level and stop acting like your man isn’t trash either… thank you, now shut the fuck up. - The World https://t.co/dHqVgQzs0N
— Jeffree Star (@JeffreeStar) March 1, 2019