Diego Maradona is a football legend, and although that word gets bandied about A LOT in both football/soccer circles, as well as sport in general, Maradona is the real deal.

In the third film from the Academy Award and BAFTA-winning team behind SENNA and AMY and producer Paul Martin, 'DIEGO MARADONA' the movie is constructed from over 500 hours of never-before-seen footage from Maradona’s personal archive with the full support of the man himself.

Maradona’s glorious run past England’s defenders on the field is the stuff of legend.

AND: that goal he scored minutes earlier with his hand – the celebrated “hand of God”, as he coined it, was the stuff of legend of mythical proportions. See that moment in football history here:

The commentary back then was both dramatic and kinda funny: “Cosmic kite, what planet are you from that you can leave so many Englishmen in your wake?” Then ensued sob of joy at such a feat, celebrated across Argentina as revenge for the Falklands War. Oh yes, remember that? The tension! 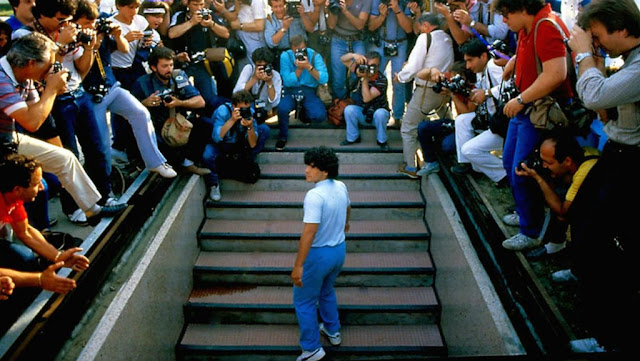 On July 5, 1984, Diego Maradona arrived in Naples (as pictured above) for a world-record fee. For seven years he turned the football world upside down.

He was the world’s most celebrated football icon and the most passionate but dangerous city in Europe were a perfect match for each other.
On the pitch, Diego Maradona was a genius. Off the pitch, he was treated like a God. The charismatic Argentine loved a fight against the odds and led Napoli to their first-ever title. It was the stuff of dreams.

But there was a price… Diego could do as he pleased while performing miracles on the pitch but, as time passed, darker days closed in.


#DiegoMaradona Check out the Roadshow Australia website for more: https://roadshow.com.au/ And follow them:
Film news and releases to you first: http://facebook.com/roadshow Exclusive Behind The Scenes Images: http://instagram.com/roadshow