I am a Delta Goodrem fan.

I have been since I interviewed her for her debut album for Sony Music, eons ago.

And I have been dying to write a simple Tweet - "I know it's cool to hate on Delta, but I really like her" - but I fear I'll be blasted on Twitter... the Twitterverse can be nasty.

I know that my statement above is passive aggressive - suggesting people want to be part of a pack that picks on Delta 'just because' - but I believe it to be true.

I liken it to standing around watching someone being bullied, and participating because it's 'good entertainment value'. And it's 'easier' to not do or say nothing.

Okay, so let's deconstruct this for a minute. What, actually, has Delta done 'wrong'?

What, because she flicks her mane of perfect hair, can sing like an angel, and is drop-dead gorgeous?

Oh wait, because she oozes sex appeal and that's a crime, clearly.

Or, because she cried when she connected with Rachael Leahcar [the legally blind singer on 'The Voice'], or because she walked off the set when the first blind auditions ep was almost up and no one had picked her yet?

I think that demonstrates she is human. C'mon, how would you act under the spotlight? 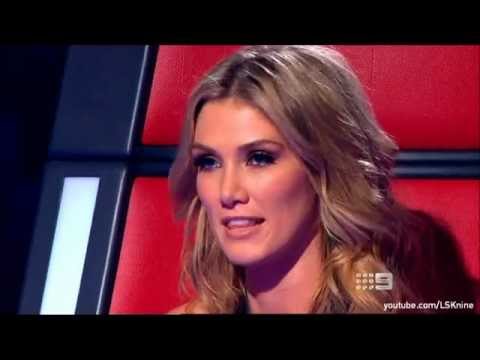 Last week I posted a story about fellow mentor Seal's appeal and how he has remained dignified about his marriage break-up, and someone I don't know in the Twittersphere proclaimed: 'yes but he is now bonking Delta'.

'Quite a claim,' I replied.

'Well she is' came the reply.

I am certain that much of the hate projected towards Delta is based purely on the fact she's a talented woman who is beautiful.

In last week's issue of Woman's Day, Delta features on the cover with the headline "I Never Said I Was Perfect."

"I can't be all things to everyone. I know who I am and where I am going, and I'm doing the best I can.

“I’ve gone through worse and you just have to keep kind of rising above and keep your dignity and grace.”
“... but I am human. I think people still have to remember that… I can’t not feel.”

"The anonymity of the web and the explosion of self-expression have allowed unhappy, jealous people to indulge the worst of human nature. It has a corrosive effect on society.
But the best way of beating the haters is to shower Delta Goodrem with compliments, write tweets and posts of support for her work on The Voice. Overwhelm the hatred with love."

This is the Delta I always remember (the one who appears at the very end of this moving rendition of Delta's song 'Lost Without You' when she was battling cancer - after the four minute mark):