The WRONG winners' name was called out at the Oscars just now... it's all Steve Harvey Miss Universe / Sarah Murdoch 'Australia's Next Top Model' style. FOR REAL.

And here are some pics... wow. 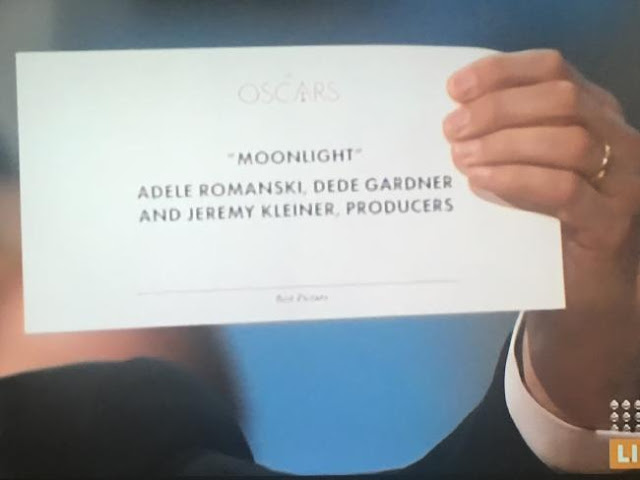 
It was a monumental live TV fail, with the Best Picture award at the Academy Awards going to the hot favourite movie 'La La Land'... when the movie 'Moonlight' (whispered to be causing an upset but who knew THIS would play out!) was the actual winner.
After reading out the nominations, Hollywood icons Warren Beatty and Faye Dunaway opened the envelope and fumbled a tad with it before announcing the Best Picture winner.
While Beatty hesitated a little and seemed a little unsure, he paused and looked at Dunaway, who then glanced down at that all important piece of paper and confidently said: “La La Land”.
The movie's ecstatic producers accepted the award, saying all their thank yous, but then... it was all 'round states of shock (witness Emma Stone's face) when it was revealed the winner was actually 'Moonlight'.
Indeed, Fred Berger, a producer on 'La La Land' was mid-speech... when the chatter happened behind him. Ouchies.
As soon as he cottoned on, Berger said: “We lost by the way, but you know what ...”
Jordan Horowitz, another producer, took over the microphone.
“I’m sorry, no, there’s a mistake. Moonlight, you guys won Best Picture. This is not a joke. Come on. This is not a joke. I’m afraid they read the wrong thing,” Horowitz said.
GOOD GOD. They're only human. We know.
But we can't wait for Steve Harvey's tweet... :)
Posted by Josie at 17:57