'Go Back To Where You Came From Live' 2018 participants: PHOTO

In a global FIRST format, the 'Go Back To Where You Came From Live' participants have been revealed, and the always controversial show will screen on SBS from 2 – 4 October at 8.30pm. 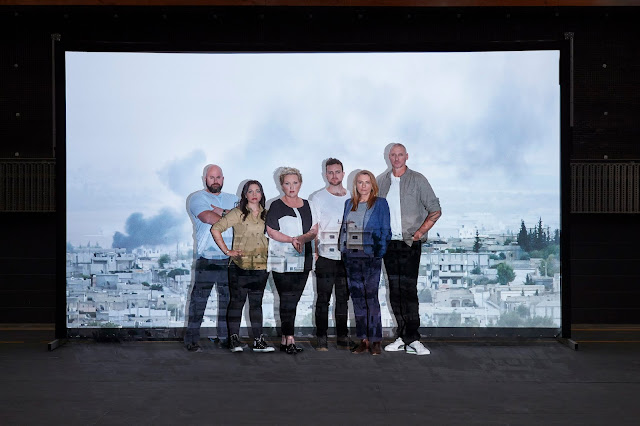 This world first show will 'take the pulse' of the refugee crisis.

Here is a first look trailer:


The cast of opinionated Australians will be led by Meshel Laurie, Gretel Killeen and Spida Everitt.


A group of Australians are about to embark on a journey to some of the most dangerous places on earth.

In SBS’s most ambitious television event to date, Go Back To Where You Came From Live will take the pulse of the evolving global refugee crisis in real time.

The refugee crisis continues to be the world’s greatest humanitarian disaster with 68.5 million* displaced persons worldwide.

In 2018, Australia’s policies around refugees continue to polarise and the refugee and asylum seeker debate is still one of the most complex and divisive.

Over three nights from 2 – 4 October, Australian audiences will follow events live from conflict hotspots and frontlines across multiple continents, witnessing the complexity of mass human migration and its ripple effects in 2018. Journalist Ray Martin and SBS World News’ Janice Petersen will be stationed in the ‘Nerve Centre’ in the studio in Sydney, as the stories unfold through a mix of documentary elements and live crosses to participants on-the-ground.

The participants, each with pre-conceived ideas about refugees, will glimpse the reality of life in disputed territories, at border crossings and inside refugee camps. They will get a first-hand experience of the global refugee crisis beyond the headlines, protests and policies, and opinions from all sides of the debate will be challenged.The participants about to undertake this journey are a mix of high profile and everyday Australians, each with strong views on how Australia responds to the refugee crisis. They include:

SBS will announce more participants and the global locations they will visit in the coming weeks.

“Using state of the art technology to broadcast from the heart of the global refugee crisis, Go Back to Where You Came From Live is one of the most ambitious television events in Australian broadcasting history.  By taking audiences to the frontlines of this crisis in real time, the latest instalment of SBS’s award-winning series will capture a snapshot of the issue as it develops with a sense of urgency befitting the subject.

“Opinions will be challenged as we witness stories of adversity, resilience and an optimism for a new life from refugees and asylum seekers at home and abroad. Putting this human face on a seemingly unsurmountable problem and encouraging a national conversation is what SBS does best.”

Go Back to Where You Came From Live is a CJZ production for SBS, with principal production investment from SBS in association with Screen Australia. Financed with the assistance of Create NSW.

Michael Cordell, CJZ Creative Director, said:
“Covering the global refugee experience in a live television event is probably the most difficult project we have attempted. Despite the challenges it’s hard to imagine a more important story to bring to Australian audiences. The immediacy and veracity of live TV will make this incredibly compelling.”

“It is exciting to see this award-winning series return in an innovative and more technologically advanced format. SBS has proven itself to be a leader in event television, with bold documentaries that spark national conversations on complex issues. With new hosts, and new ways of bringing these stories into Australian living rooms, I’m sure this series, produced by the experienced team at CJZ, will resonate with audiences and have an impact beyond broadcast.”

“As a champion of diverse storytelling, we are hugely excited to be involved in what is set to be a timely and epic broadcast experience. Through incredible access, Go Back Live will shine a unique light on the global refugee crisis to capture the attention of audiences across the country and challenge the perceptions of many. This is such an exciting technological feat for SBS and we can’t wait to watch the experience unfold across the three nights.”

This is the fourth season of CJZ and SBS’s Go Back To Where You Came From; one of the world’s most awarded television formats - winner of two Logie Awards, an AACTA Award, an International Emmy, and two Rose d’Or awards, as well as a UN Peace Award.
*Source: http://www.unhcr.org/5b27be547.pdf

Go Back To Where You Came From Live airs over three consecutive nights, 2 – 4 October, 8.30pm, LIVE on SBS and streaming live on SBS On Demand.

Join the conversation #GoBackLive
Posted by Josie at 15:35