Sonia Kruger - co-host of Channel Nine's 'Mornings' breakfast TV show - announced on Saturday via her Twitter account that she is pregnant with her first child. She captioned the photo she posted like this:

UPDATED 7.20pm: Sonia Kruger is having a baby girl! She just announced this in an interview with Leila McKinnon on 'A Current Affair'.

And, when she announced the news to co-host David Campbell - who a few weeks ago announced he and his wife Lisa are expecting twins to join their son Leo - she had her phone camera ready to record his reaction:

This morning, Sonia was interviewed by the Nine Network's entertainment editor Richard Wilkins on all the details of her pregnancy.

The 48 year old TV co-host revealed: “I wanted to be really clear today and let everyone know that I did go through IVF and I did have an egg donor.”

“I have a very good friend who gave me an egg and that’s how this pregnancy came about.

"When you get to my age - to use your own eggs to have a baby you’re not really going to be successful - I mean the odds are at around one in a million to get there and my doctors have been very clear with me, because I’d been through IVF before”.

She continued: "I’m thrilled to bits and I think it’s entirely possible to be as in love with a baby that doesn’t necessarily share your DNA as it is when you adopt a child and fall in love with that child."
Indeed it is. I have seen this in action and it is utterly true.
"So I just feel incredibly appreciative towards what [my friend] did for me and the fact that it worked, because for a long time I didn’t think it would," Sonia added.
She told Richard this morning she feels she can “finally relax” about the secret she’s been keeping for the past four months. And kept it well she has, if David's reaction is anything to go by.
Her partner Craig McPherson, who has six adult children from his previous relationship, met Sonia when they were both working on the now-defunct Channel 7 TV show 'Today Tonight'. Sonia was previously married to James Davies, but the couple had no children.
I had the good fortune of interviewing Sonia Kruger at the Channel Nine Sydney studios over a year ago for Jetstar magazine. You can read the whole story here. She is as lovely as you'd imagine - approachable, friendly, and we bonded over both having a 'westie' background: hers from Queensland's western suburbs, me from Sydney's west, and her partner Craig from good ol' Wentworthville. 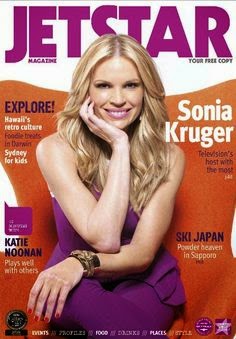 Huge congrats to you and Sonia and Craig. This will be one very well-loved child.
Posted by Josie at 14:08