A new book by Cindy Antsy is just out titled 'Love, Lies, and Spies', and it's reviewed here by Gabriella Dessanti.

Here is the book cover: 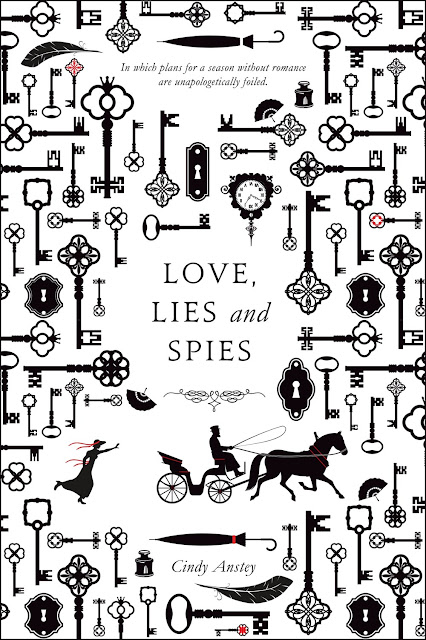 And here is Gabriella's review:

Set in the British Regency period, this is a novel for lovers of historical romantic comedy. It is entertaining with witty dialogue between the main characters with plenty of playful banter. Spencer and Juliana are both committed to their work and profess not to be interested in love and marriage, bound by their mutual desire to remain in control of their futures. Unlike Emma from 'Jane Austen', who doesn’t realise she loves Mr Knightley, Juliana feels something from the start for Spencer, however she tries to play it down and avoids acknowledging to herself the strength and source of her feelings. Similarly, Spencer unsuccessfully tries to hide his own bourgeoning feelings and remain steadfast to his spy assignment.
Juliana is likeable; she doesn’t flaunt society rules just to test the boundaries nor to purposely annoy her overbearing Aunt Phyllis, only to the extent to create some personal space and pursue her publishing aspirations. Setting herself apart from other women in this genre, Juliana doesn’t try to control or manipulate people nor fall prey to miscommunications and misunderstandings; she is the perpetual damsel in distress requiring rescue from a knight, here the gallant and obliging Spencer Northam. As damsels go, she is not weak and helpless; in her most perilous occasion when entangled with a villain, she proves herself strong and daring and not unwilling to use force to protect herself and her reputation.
The dynamic pair keep secrets from one another; as a spy it is inherent in Spencer’s occupation. However, the people that they also engage with, unbeknown to them, are also hiding secrets, playing roles to further their personal objectives. Layers of lies and spying form the crux of this novel; the key, just like the multiple keys on the book cover, suggest an unlocking of the layers of each character - their passions, motivations and vulnerabilities.
A delightful and charming novel, each chapter starts with an amusing summary of the events to unfold, such as “in which a reprehensible betrayal is brought to fruition and a delicious awareness is born…”

A beguiling new author is born; Cindy Anstey has laid down the gauntlet with her debut novel an instant classic for book clubs and English Literature students.
Rating: 4 out of 5.
'Love, Lies, and Spies', by Cindy Antsy is out now through Pan Macmillan.

About the Author
Cindy Anstey spends her time writing ad adventuring around the world. She has lived on three continents, had a monkey in her backyard and a scorpion under her sink, dwelt among castles and canals, enjoyed the jazz of Beale St and attempted to speak French. Cindy lives history, mystery and a chocolate Labrador called Chester. Love, Lies and Spies is her debut novel. She currently resides in Novia Scotia, Canada. Contact her on Twitter at @CindyAnstey.