He died in a US, Phoenix-area hospital where he was battling respiratory issues.
The legendary boxer and humanitarian had checked into the hospital on Thursday, and reps said he was in fair condition, but on Friday his health worsened.
Ali will be remembered as: one of the most recognised boxing figures globally, after winning boxing's heavyweight title three different times, the first of which came in a knock out with Sonny Liston in 1964.

He was famous for his boxing matches - the "Rumble in the Jungle", the "Thrilla in Manila", and for his forthright quotes: "Float like a butterfly, sting like a bee."
Here is one of his most famous interviews:

He was born Cassius Clay but changed his name and converted to Islam in 1964. He also famously refused to enter the Vietnam War in 1967 as a conscientious objector.
He was diagnosed with Parkinson's Disease in 1984, and remained very active at international events in and out of the sporting world. When he lit the Olympic flame at the 1996 Atlanta games, it was and is still considered one of the most iconic images in Olympic history: 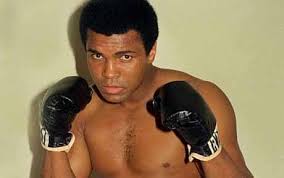 Ali is survived by his wife Yolanda Williams and nine children: seven daughters, and two sons, including Laila Ali﻿, who became an undefeated boxing champ herself.