Dannielle De Andrea is currently in Australia and rolling out a series of intimate gigs around major capital cities, and this gorgeous and talented woman is a force to be reckoned with.

If you think you've seen Dannielle before, you'd be right!

And she's back in Australia to celebrate her new album titled 'The Call', which is a blend of jazz, soul and folk, and features the song 'High Dreams' (with Larry Goldings on piano), which is the winner of the jazz/soul division of the 'UK Songwriting Contest'.

Written from personal experience, 'The Call' traces Dannielle's relocation from Australia to America, and explores themes of insecurity, heartache, nostalgia and hopefulness.


After a string of performances in New York, Los Angeles, London, Italy and Nashville, Dannielle was dubbed the ‘Aussie Supervoice’ and her live shows are generating a genuine buzz on the international music scene.
With three top 40 UK soul chart hits under her belt (as Danni'elle Gaha - yep, THIS is where you may remember her, from her days as Danni'elle Gaha), Dannielle’s music has been remixed by the likes of Joey Negro and Roger Sanchez and her vocals have appeared on releases by Sting, Kylie Minogue and the Pet Shop Boys. She has performed live with the likes of Jackson Browne, John Farnham, Joe Cocker, Tom Jones, Ariana Grande, Meagan Trainor and James Brown.


Alongside her solo and backing vocal work, Dannielle regularly fronts the popular collective The Song and Dance Society. Dannielle has also collaborated with composer Christophe Jacquelin on the beautiful French project Leaving The Ozone, which featured in the IMAX movie Dolphins and Whales.
According to Australian music newspaper Drum Media, "Dannielle De Andrea’s smooth and powerful voice ‘could quell riots and romance tyrants...'"
Danielle answered some questions just for Josie's Juice right here, and you can catch her at Venue 505, at 280 Cleveland Street, Surry Hills.
Click right HERE to but tickets. 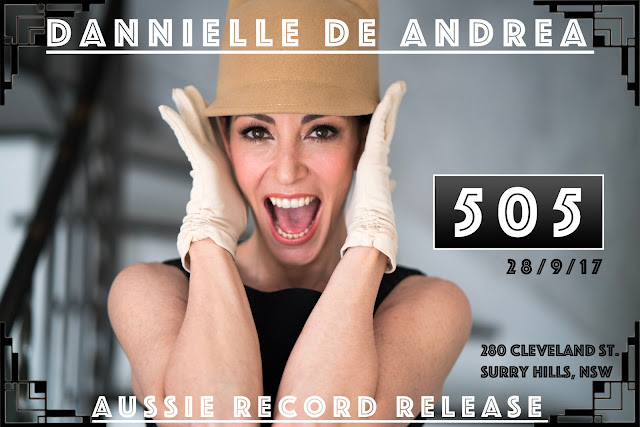 So, how did Dannielle De Andrea discover her love for singing?
"Well my mum was a dancing teacher and always played the best music at the dance school, in the car and in the house! My father was a drummer and a singer, so it was in the genes. Having said that I never really wanted to sing as a child, I liked it, but it wasn’t my dream to be a singer, all I wanted to do was dance like mum!

"She told me daily to “let the world hear ya darlin’”... she believed in me more than anyone and would get me to sing at the dancing school concerts and shows, so I knew I could and never had the fear of singing in public when I decided thats the career I wanted at 18 (mum was so happy, she even named me after a French singer). I don’t know if I would be singing if she hadn’t believed so much! Truly my inspiration and now I’m trying to get out on that stage to let the world hear me more than I ever have before!"

Talent is one thing, but when was THE moment Dannielle knew she could make a living out of singing?

"I actually auditioned for Glenn Shorrock's “One For The Money” show and got the gig and it started there! But I’ve never had that thing of “I wanna be famous and make a stack of money”.

"I’ve just always loved to sing and perform, since I was little - it’s my therapy. If I don’t do it, I don’t feel right! Making a living out of singing ain’t easy, - if money was the reason I was in it, I would have given up long ago, haha!"

You will recognise Dannielle as one of the Nissan Cedrics. SO, how did that gig pave the way for her career? And do people still recognise her from that?

"I actually had a record deal in the UK with Sony records, before The Nissan Cedrics and Club Buggery. I was the first Aussie artist to break into the dance/soul charts in the UK and had 3 top 3 dance hits with awesome videos, that not many people saw," laughs Dannielle. But mum loved them! I made an album, which never got released, came back to Australia and got the call from the lovely Jamie Rigg, for Club Buggery' (TV show). It couldn’t have come at a better time! I went in for the pilot, met everyone, and Louise Anton and I blended beautifully, and BOOM - the Cedrics were born! That show is still to this day one of the best experiences of my life - we all had so much fun and everyone was just so kind and caring!  There was not a mention who we go to sing on and sing with!

Like many exceptional Aussie artists, we sadly lost her talent to another country.

"I moved to the US in 2006, for lots of reasons, but mainly I felt I had done all I could here in my own country, after being on what I reckon was one of the best variety TV shows in Oz,  releasing a solo jazz album, touring with John Farnham for 10 years, I kinda wanted to do more and was a bit afraid of staying here, getting on that safety merry go round and becoming a bitter cabaret singer, so I packed my two suitcases, got a visa and over I went, to start again!

"It was so hard, being the newbie, after being so established in my own country, but it was also great to be so free and just start again! What has come from that move has been more than worth it! I fell in love with the greatest guy (married 10 years in December) I have worked with some of the greatest musicians, I only dreamed about and used to read their names in the credits on the back of CD covers, I’ve toured with Jackson Browne, recorded at Capitol Studios,  become a better songwriter, performer and I”m so much more open to all styles of music! I’ve learned a lot about myself, my strengths and those things I still need to work on and no matter where I go, that old mantra in my head of “doing this because I love it” has proved to be so true and what I’m on this planet for! This year has been a big year personally - it’s been tough as I lost my number one support, my gorgeous mum and my Queen, so now I’m putting all my energy into doing what she said daily and “Letting the World Hear Me”.

Booking shows all over the world and just getting there and giving it a go! Feels good, a little scary, but she’s with me, I can feel her, so I have a strength I’ve never had before! Feels like she’s up there being the puppeteer and moving those strings, hahaha!"

So, what is Dannielle most excited about with coming back to visit Oz?

"I love Australia, we really are the lucky country, I love seeing my family and my friends for catch ups, I really love gigging in Oz too with my buddies, nothing has changed. It’s like I saw them yesterday! looking forward to my launch in one more sleep, which is in honour of Mum!

"I’m coming back in December for some more shows outside of Sydney too YAY!

Performers often feed off the energy given by the audience, and it goes both ways of course, where the audience gives positive vibes to the performer.
For Dannielle, the connection is "what it’s about kids..."

She adds that she loves performing live and loves connecting with her audience.

"Telling the story and feeling the audience go on the ride with you, there is nothing like that!
We just did some acoustic shows in Italy (my gorgeous hubby Kyle and I) the whole audience were Italian and didn’t speak English, I sang my entire album in English and they were all crying! That’s what it’s about! Music is universal and if you can translate that feeling, then I reckon you can’t ask for anything more!

Here are some more ways to get nice and cosy and comfortable with Dannielle, and her signing style:

The End Of Chapel Road live in the studio:

And recording some of the album at Capitol Studios 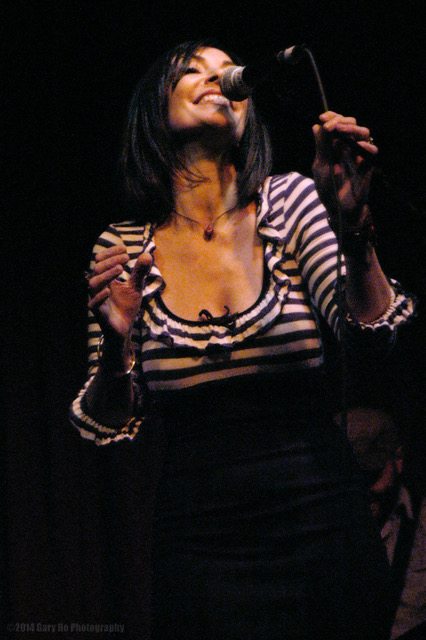