Is this not the most beautiful celeb baby mag cover you've ever seen? Giuliana and Bill Rancic are showing off their baby boy! 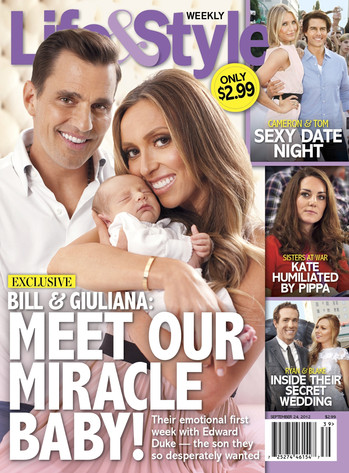 Two weeks after becoming a family, the proud new parents are revealing the first photos of their new addition - a son they named Edward Duke Rancic - in the latest issue of [US] Life & Style magazine.
The cute baby boy was born via gestational carrier in Denver on August 29, with Giuliana and Bill saying they are "blessed beyond words."
"[He's] got Giuliana's dimples!" Bill tells the magazine, adding: "It's amazing how maternal instincts have taken over, and Giuliana's just supermom."
Adds Giuliana: "Edward is Bill's late dad's name and my dad's name," Giuliana explains. "It was a way to honor them. And Duke means leader."
Giuliana is taking some time off from her shows 'Fashion Police' and 'E! News' to spend time with Edward, and she will then be on-air, hosting the 'Live From the Red Carpet' Emmys coverage September 23.
"Coming back to E! for one night then back to changing diapers:)" she Tweeted yesterday.
Massive congrats to the couple!
For more, go here: http://au.eonline.com/news/345089/Giuliana-and-Bill-Rancic-See-First-Photo-of-Baby-Edward
Posted by Josie at 23:11