In an exclusive interview 'The Daily Edition', Geeling Ng, star of David Bowie's 1983 hit video 'China Girl' spoke to the the gorgeous Sally Obermeder and Tom Williams, co-hosts of the show. 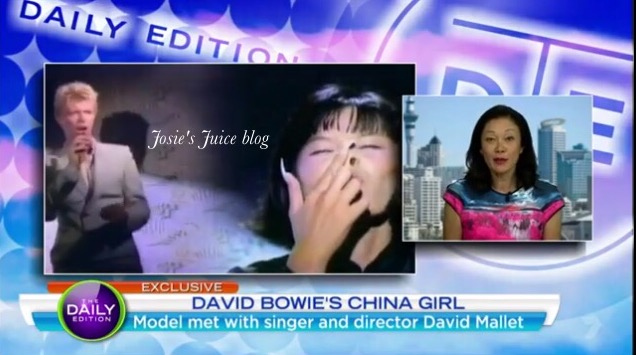 Hearing of his death, she said in the interview she was overcome with 'shock', because 'he was such a private person', she told 'The Daily Edition', which screens each weekday on Channel 7.

'I sort of didn’t believe it for a while but obviously it’s true.'

She said she'd been a Bowie fan all her life.

'The first album I ever bought was Ziggy Stardust and Spiders from Mars so to actually meet the man in person I was totally star struck and for once I just couldn’t get any words out. It was quite amazing.

Here is the clip in full:

Email ThisBlogThis!Share to TwitterShare to FacebookShare to Pinterest
Labels: Cancer, Celebrities, Everyone is talking about, Health, Music, RIP, This Just In