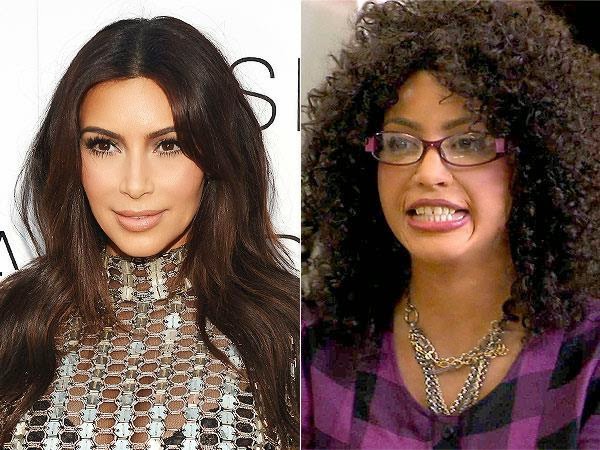 The E! star was completely unrecognisable during Tuesday's debut of 'Celebrities Undercover' a new Oxygen series executive-produced by talk show host Wendy Williams.
In the episode, Kim K is transformed into "Cynthia" via a curly wig, glasses and fake teeth to see if she could fool a few of her fans.
She joined some other women in an office to be "interviewed" for a job as Kardashian's assistant, and their loyalty is quickly put to the test by way of a made-up story about Kardashian hooking up with Eminem.
Later, at her home, Kim reveals her true identity to women, much to their surprise.
"I have something to tell you," she said as she slowly took off her disguise. "You've been with Kim all day. You have been with me all day."
Sister Kourtney, who happened to be sitting in the room with all of them, was shocked that Cynthia was actually her sibling.
Other celebs who are slated to appear as somebody else in future episodes include Fantasia, Joey Fatone, L'il Kim,Ice-T and Coco.
For more, plus a clip, click here.
Posted by Josie at 17:19

Email ThisBlogThis!Share to TwitterShare to FacebookShare to Pinterest
Labels: Americana, Celebrities, Kardashians, This Just In, TV