In fantastic new just in, Guy Sebastian has been chosen as the Australian artist to represent Australia in the Eurovision song contest, the 60th anniversary of the international contest.

He is off to Vienna, after being announced as Australia’s first ever entrant in the Eurovision song contest. YAY GUY! 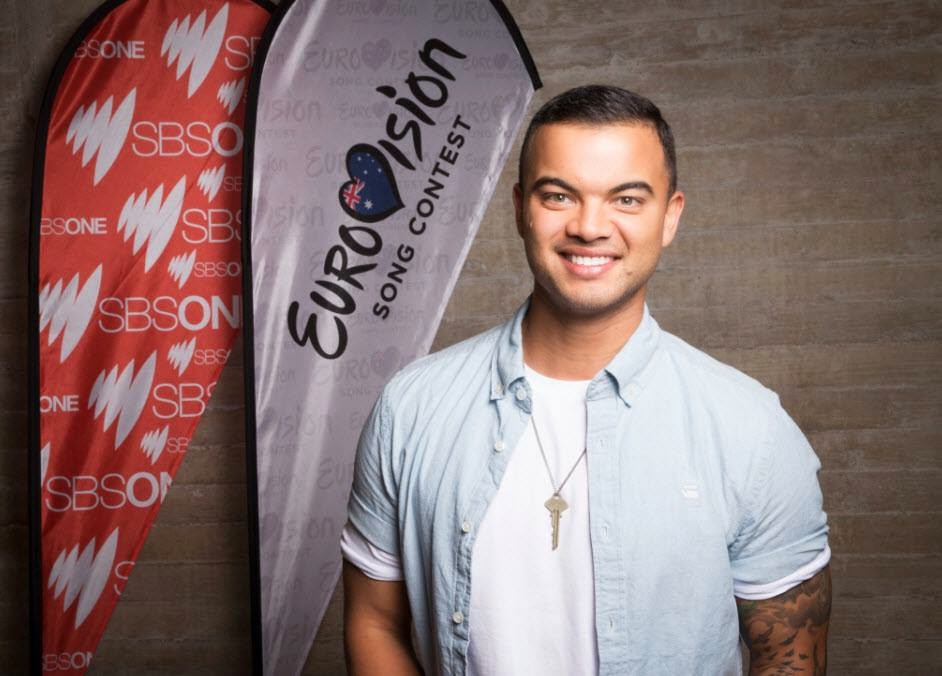 “I'm pumped. I mean it's Eurovision. It's such a huge audience and such a huge production,” he told SBS, at a special event at the Sydney Opera House on Thursday morning.
Read more of this article here.
"To be representing Australia at Eurovision sounds a bit random, but we're a wildcard entry and I'm stoked to be chosen."
The 33-year-old R&B/soul singer, who got his break by winning series one of Australian Idol in 2003, is representing Australia, you guys!
He will be the Eurovision 2015 Grand Final special one-off wild-card entry, performing at the Wiener Stadthalle stadium, and in front of an estimate television audience of almost 200,000,000. TWO HUNDRED MILLION PEOPLE, PEOPLE!
The song he will sing will be released in the coming weeks.


Australian audiences first discovered Guy Sebastian when he was crowned the first winner of Australian Idol in 2003, and he has since gone on to release eight studio albums with Sony Music Entertainment Australia, with accumulated sales in excess of 4.5 million units.

With 51 platinum and seven gold certifications Guy has become one of Australia’s most successful male artists. In 2013, his single 'Battle Scars' went Platinum in the US, making Guy one of few artists in Australian music history to achieve this. His performance at Eurovision will be an incredible opportunity to introduce Guy to European audiences. Imagine!

Australian fans will be able to watch the performance live on SBS ONE.
Despite more than two million Aussies watching Eurovision each year, this is the first time Australia has been able to compete and vote in the contest.
A long running campaign to have Australia included in Eurovision saw Jessica Mauboy perform at last year’s contest in Denmark.
Olivia Newton John performed in 1964, the same year Swedish pop group ABBA won!
And remember Gina G! She came eighth in 1996, while The New Seekers finished runner-up in 1972.
If Australia wins, it won't host next year's contest as is tradition - but will have a chance to enter again in 2016.

The Eurovision Song Contest reached an Australian audience of over 3 million* in 2014 and an international audience of over 195 million people and SBS and production partner Blink TV agreed that Guy Sebastian was the perfect artist to showcase Australian music on the world’s biggest stage.

“We are very excited to have secured an opportunity for Australia to be represented at Eurovision. It has been a four year journey to achieve this ambition and I’m so proud that Guy Sebastian will be representing our country to Eurovision’s world audience.

“As an accomplished artist who has achieved global success, Guy’s vocal talents are unrivalled and he has the experience, maturity and strength of character to represent us in this competition.

“Australians love to compete, and we wanted to find someone who we can all believe in and get behind, and Guy is the perfect artist to represent Australia and SBS on the world’s stage.”

“We’re thrilled to announce Guy Sebastian as our as our first Eurovision competitor. He has an individual soul voice that suggests the greats like Stevie Wonder and Al Green, but is distinctively his. He has matured to become a terrific songwriter, and songs like Battle Scars and Linger show his integrity as an artist, and the depth of his talent.

“Most of all, Guy is an artist that reflects where Australia is now - he is very much a fitting ambassador for our music and our cultural life (and not just because of his love of cricket), I’m sure he will fly the flag for us wonderfully.

“One of the biggest factors in making this choice is the scale of the event – we need an artist who has the confidence to nail it on the world’s biggest stage. I know Guy will be one of the best singers there this year. And who knows he may just bring it home."

Guy Sebastian himself has said:

“It's incredibly exciting to be given the opportunity to perform at the Eurovision Song Contest. It is the biggest music event in the world with an amazing history and tradition and I’m truly honoured to be invited to represent Australia in its first time ever in the competition.”

“Guy has become one of Australia’s most successful artists over the past 12 years through amazing talent and sheer hard work. Since 2003, he has delivered a series of multiplatinum singles and albums with sales over 4.5 million units in Australia, and over 1 million copies sold of ‘Battle Scars’ alone in the USA. It is such an exciting opportunity for Guy to be the first Australian representative and I am incredibly proud that he will be representing Australian music on the world stage at this year’s Eurovision Song Contest. We are delighted to be partnering with SBS on this wonderful opportunity and look forward to sharing his incredible talent with the rest of the world.”

More details on Guy’s performance at Eurovision and which song he will perform will be released in the coming weeks.

Read more about the broadcast here.
Posted by Josie at 10:56