James Corden and Jennifer Lopez have done the carpool thing. And it has been touted as   "the best ever."

Also: James takes Jennifer's phone and sends a text to Leonardo DiCaprio. AND HE REPLIES...

Here is the video:


James texts to Leo:
"Hey baby, I'm kind of feeling like I need to cut loose. Any suggestions? Let me know. J.Lo, you know, from the block."
"I'm not going to let you send that!", she says, with a laugh. But before she could stop him, James sends the text. Of course.
And then...
"He wrote back!" JLo says. "No way. No, he did not!" Corden replies.
"He said: 'You mean tonight, boo boo? Club-wise?'" JLo reads. "See, here's the funny part is that he actually thinks I'm serious!"
"I love that he wants you to cut loose. This guy is the best," James replies.
Other vid highlights?
She talks about her personal life: she has gotten five wedding proposals.
"I've had some amazing proposals," the mother-of-two revealed. "I've been married a couple of times I'm still trying to get it right."
"I don't want to compare one to the other, they were all pretty spectacular, they were nice," she added. "And there were some that asked me to marry me that were good, but I said no." 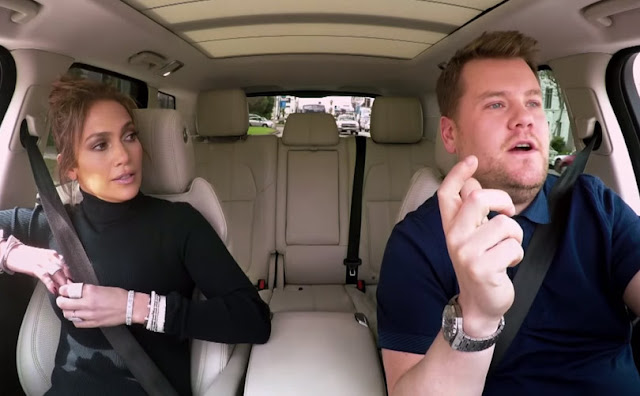 Email ThisBlogThis!Share to TwitterShare to FacebookShare to Pinterest
Labels: This Just In, Videos, Viral Videos