The 'ad campaign' you may have seen for the past few days is not a meme... but it's also NOT an actual ad campaign. It's a clever bunch of people with a bawdy sense of humour creating a slogan, a logo, a clothing line... and a whole bunch of controversy.

In any case, the whole thing has now gone viral.

It's controversial, yes... but not for reasons you may think.

It is in fact NOT affiliated with the government body Tourism NT.

And now, the Northern Territory’s government is considering legal action over the controversial travel merchandise spruiking the Top End as a tourist destination.

A group called NT Official — which has no connection to the government’s actual tourism arm, Tourism NT — is selling shirts and souvenirs emblazoned with the words “CU in the NT”. Here is their site and the merch they are selling. 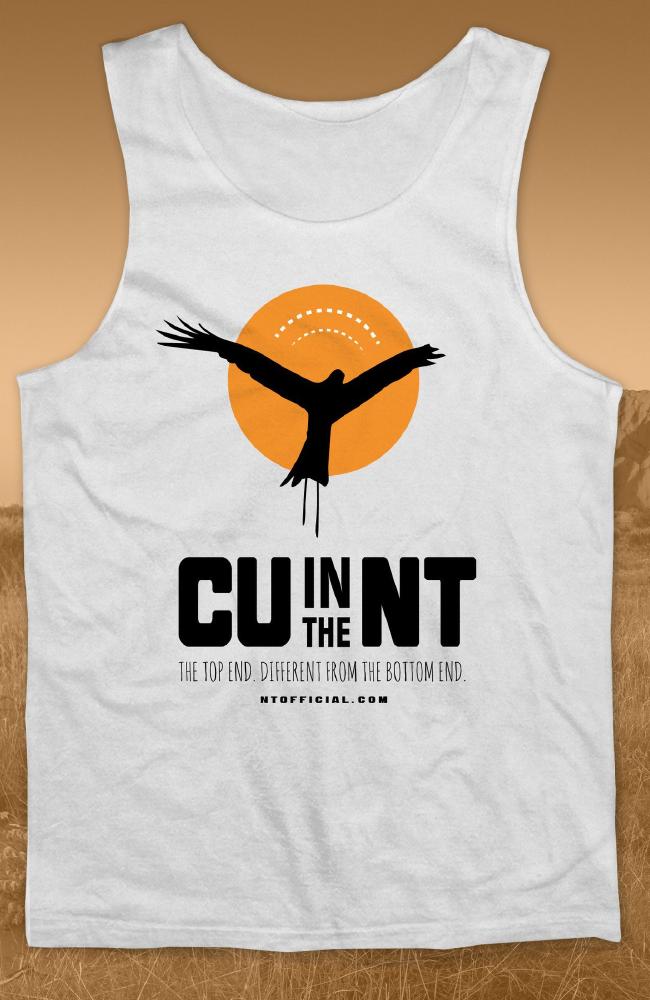 And so, the issue is not the slogan - but the use of official Tourism NT photos for commercial purposes without proper attribution. The design is very similar to the Territory’s official “Brolga” logo... but it’s different enough to avoid infringing trademark laws.

Here is that Brolga logo we know:

Interestingly, the identities of the people behind the campaign are yet to be revealed, however, in a statement, they described NT Official as a “guerilla group of people with the aim of promoting travel awareness to the NT region, specifically targeting younger markets”.

Their design has been met with lots of positivity on followers of their Facebook page - but also some hate.

Brett Mansfield How's it racist? No race is mentioned at all except by you.
Like · Reply · 3 · 21 hrs

Alvina Ropata Edwards WOW Brett - what is significant about the lands? or are you just a dumb white Australian
Like · Reply · 21 hrs

Jakob Andenson Alvina is the problem with society today- she just showed everyone her/ his/ its true colors. BIGOT!
Like · Reply · 2 · 18 hrs

Deborah Flowers You are fighting a losing battle Alvina. The slogan has gone viral around the world and has raised alot of interest. See tourists like humour and a laid back attitude, something the NT can offer them. Why would you be so against it? Are you offended because you are a CUNT and dont like people walking around with your name on their tshirts?
Like · Reply · 2 · 18 hrs

Scott Manning I still fail to see how this is racist? you havent explained that yet.... also, As its a slogan, it is pretty clear that it is supposed to read See You in the Northern Territory.. if someone wants to twist it so be it.... and anyway, you need to use co...See more
Like · Reply · 12 hrs

Carpo Carps So people are so left that they left their brain behind and also claim racism whilst being racist themselves. The hypocrisy of the left amazes me.
Like · Reply · 2 · 12 hrs

CU in the NT The NT is an amazing place to visit, we really hope to C U in the N T soon Alvina. It has so much to offer.

Philip Leung Clever campaign. I didn't know what or where the NT was before the media picked this up. Keep up the good work and continue making these babies cry.
Like · Reply · 12 · Yesterday at 07:17

Stephen Mead What or where is the NT then? Cos now you know all about it apparantly. I haven't been there. What's it like?
Like · Reply · 2 · 23 hrs

Phillip Brindley Stephen Mead It's just above the huge dark spot without power on the map of Australia......the main port is run by a communist foreign government.....and people like to swim in either beer or amongst crocodiles.
Like · Reply · 1 · 8 hrs

Sue Croxford I'm an old lady and I think it's a bloody fantastic slogan. Stop being so precious . Great advertising.
Like · Reply · 7 · 17 hrs

Janet Fletcher I love it too. Brilliant marketing. Brilliant place to visit. Cycle around Uluru. Walk through Kata Tjuta. Visit Kings Canyon and the Alice. Kayak in Nitmuluk gorge. Soak yourself in the Hot springs in Katherine. Visit Litchfield Park and Kakadu. Amazing sights and people. Oh and lots and lots of crocs....go see NT Australia. I have and will again.

Stephen Mead I think it's genius. And so original. I remember thinking when I was brand manager if fcuk... I thought to myself, how will anyone come up with something more genius and original than fcuk. They just won't, it can't happen. Unless..... And this is a b...See more
Like · Reply · 9 · 23 hrs

Jakob Andenson Catchy slogan...At least the Poms have a sense of humour...

Phillip Brindley Jakob Andenson Using foul words isn't humour it's what people use because they can't think of anything clever.
Like · Reply · 1 · 8 hrs

Nick DjPhyre Bullock I have a lot to say to you crybabies who keep pretending to be offended by this company's clever slogan, but I'll keep it short in honor of your short-mindedness: Please, just shut the f*ck up already.
Like · Reply · 1 · 9 hrs

Robert Meischke I may now rethink my plans and avoid the Northern Territory when we travel next year. I'm not sure I want to be in a place that thinks like this.
Like · Reply · 1 · 16 hrs

Simon Hicks Better stay away from the Uk then where an international fashion retailer making shirts that say FCUK started. Oh but this is different?
Like · Reply · 15 hrs

Robert Meischke No, you're right. It's not different. It doesn't stop me from going to England, as it's a brand, not a state marketing campaign. But, I do exercise my right not to support them with my custom.
Like · Reply · 15 hrs

James Carthy Robert Meischke Please explain how you came to the conclusion that this was a 'state marketing campaign'?
Like · Reply · 11 hrs

James Carthy Robert Meischke If you looked even a little in to the concept you would see this is also a brand just like FCUK.
Like · Reply · 11 hrs

Robert Meischke Thanks James. I may be wrong on that. I'm happy to accept that it is just another brand. I simply choose not to buy it.
Like · Reply · 10 hrs

Jody Ellis What's beautiful about a place who uses the filthiest word in the book? NT you are embarrassing Australia. I'm disgusted.
Like · Reply · 4 · Yesterday at 00:32
4 Replies

Julia Halgren Katherine Blow official FB page, and now the official government body is going to sue them. This is so funny
Like · Reply · 20 hrs

Sheryn Labate Came here to find out for what the c and u stand since I was aware that NT is for Northern Territory. Trying to avoid reading any trolling comments and so sorry Australia that most of us here in the Puritan founded 'murica have decided it's okay to ju...See more
Like · Reply · 5 · Yesterday at 07:14

Sheryn Labate Stephen Mead Thanks, I may well be but then again I'm really too old to care one way or the other, would just like to live somewhere with less hypocrisy and fewer guns than my own deranged homeland.
Like · Reply · 20 hrs

Sheryn Labate Michael Kenyon Are you saying that there in Australia the word is meant to be a very derogatory slur against a woman, worse than whore even? If so then how is it that men are also called cunts? I had interpreted from my obsessive reading and comic watching that the Aussies use cunt more like the 'muricans use douche.
Like · Reply · 1 · 6 hrs

Sheryn Labate Michael Kenyon Oh and, yes I followed links to find out the "see you" reference but thanks for the enlightenment nonetheless.
Like · Reply · 6 hrs

Graham Douglas Wowsers give me the SH1Ts.
Like · Reply · 19 hrs

Lucy Valentine This is incredible hahaha
Like · Reply · 13 hrs

John McGarry This is a recycled and very tired schoolyard joke. The one about ET's mother . Wasn't funny then and still isnt .
Like · Reply · 1 · 20 hrs

Scott Manning What was the one about ET's mother?
Like · Reply · 12 hrs

John McGarry What did ET say to his mother NT when she left him behind on earth. CU NT. Real dad joke. Lol
Like · Reply · 2 · 12 hrs

Tourism NT has no connection and is no way affiliated with the website or Facebook page of NTOfficial.com or any of their promotions.

And on the NT Official page, this disclaimer at the bottom:
NTofficial.com is NOT affiliated with, endorsed, associated with or sponsored by any government or official NT tourism organisations or their associated brands, companies or subsidiaries. We're just some lovers of the top end, spreading love for our favourite territory!
According to this article, NT Government is hoping it can lure European backpackers from Bali with the promise of a Top End adventure.
It says:
In the face of dwindling international visitors from the UK, France and Germany, the Government has launched a new campaign to target Bali-bound travellers and convince them to tack on a trip to Darwin.
As the Territory's resources-driven economy slows, the tourism industry, which is the Territory's biggest employer, is being looked at to fill the economic hole.
Tourism NT data has revealed tourist numbers have been in decline since 2000.
Backpacker numbers have been particularly dire across Australia, and the campaign will target European backpackers already planning trips to Bali.
"We know Bali is a backpacker hotspot and there are many similarities between it and Darwin with both having a thriving nightlife, tropical weather and adventurous activities" NT Chief Minister and Tourism Minister Adam Giles said.
"But there is much more the Northern Territory can offer that Bali simply can't, including our rich Indigenous culture, spectacular natural landmarks like Ubirr lookout in Kakadu, epic outback road trips and the spectacular jumping crocodiles at Adelaide River."
The article adds that Mr Giles states that more than 400,000 European tourists visit Bali each year, but most are not aware Darwin is only two-and-a-half hours away by plane.
And:
In its 2020 Vision report, Tourism NT stated that the economy relied on the tourism sector far more than the rest of Australia.
The Territory Government is hoping to grow tourism to a $2.2 billion industry by 2020.
Plus:
Mr Giles said he would also lobby the Federal Government to rethink its approach on how backpackers are taxed while working in Australia.
Interesting! Will this cheeky NT Official help in creating a whole new awareness to the region?
Posted by Josie at 10:20

Email ThisBlogThis!Share to TwitterShare to FacebookShare to Pinterest
Labels: Everyone is talking about, Pop Culture, This Just In, Travel, Viral Pics