'Look Me In The Eye' Casting Call: VIDEO + info

A new show is coming to Australian TV... and you can be a part of it.

First, some questions they ask:
Is there a painful rift between you and a family member?
Have you grown distant from a friend you used to care about?
Has a close relationship ended and you don’t know how to move on?
SBS are looking for people who genuinely want to reconcile after years apart to participate in a compelling new TV documentary series.

'Look Me In The Eye' could provide an opportunity to heal old wounds - is it's where you want to go.

Could sitting face to face and looking in each other’s eyes for several minutes help you find the closure you deserve?

But for many, it could be the 'place' to go to start to heal. Or, start a reconnection process. 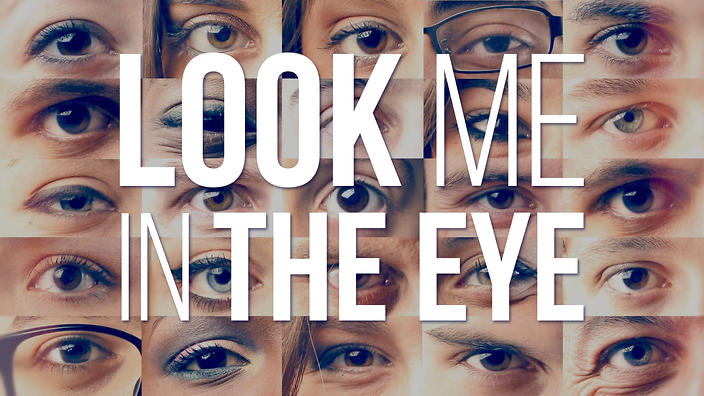 Some more questions they ask you to ponder:

Have you become distant or fallen out with a family member, friend, colleague or lover?

Are you at a loss as to how to reconnect with this person?


Do you want the opportunity gain closure or to start a fresh?


Perhaps you just need to see that person one more time.


No words are spoken, but so much can be said.

Here is what they are looking for (taken from the casting website):

You must be 18 years of age

You must be an Australian Citizen or Permanent Resident

You must attach a clear, recent photograph of yourself

If your application is successful, Endemol Shine Australia’s Casting Team will contact you to discuss the next step

The basic premise of the documentary series: two people who have had a falling out/haven’t spoken to each other in years sit in a room together, with non-verbal communication, and look at each other. It’s based on psychological idea/theory that eye contact can be more powerful than verbal.

To give you an idea of the power of this process, you may be interested in a popular video of a similar experience filmed by Amnesty International, called "Look Beyond Borders":

The show is looking for people who want to reconnect with a loved one, an ex, a colleague, a family member without actually talking to them. Freaky, right?

The documentary, which will hit screens in 2017, is a compelling look at what happens when eye contact, and nothing but eye contact, is used as a form of communication when all other attempts to reconcile have failed.

Recent studies have shown that eye contact has a uniquely powerful effect on how we connect with other people. When no other words are spoken, so much can be said.

The concept is based on the research behind the power of uninterrupted eye contact developed by psychologist Arthur Aron in 1997.

"Eye contact provides some of the strongest information" says social psychologist James Wirth, who has conducted more recent studies in 2010 about the impact of eye gazing.

That's why often it is said that eye contact can be more powerful than words.

'Look Me In The Eye' is seeking Australians of at least 18 years old from all backgrounds who are genuinely looking to reconnect with someone in their life. Ideal candidates are those who are living with an unresolved conflict with a family member, friend or colleague.

Those who want to be involved are ideally looking for an opportunity to reconcile and start fresh with someone and both parties must consent to meeting. The series will seek to find out if eye contact alone can help bridge personal and psychological riffs.

Debbie has over twenty years experience developing and producing high quality programs for the commercial networks, Foxtel, the ABC, and SBS in Australia. Her expertise in factual television has seen her in leading roles on highly regarded series, including most recently Kings Cross ER for the Nine Network, Coast Australia, for the History Channel on Foxtel and BBC -2. Prior to that Debbie was Executive Producer on the documentary series Taking on the Chocolate Frog, which was a finalist in the 2014 AACTA awards for best Documentary Television program and also a finalist in the 2014 SPAA (Screen Producers of Australia) awards for best Documentary series.

Previously she was most notably Executive Producer of Development at Zapruder’s Other Films, during which time she executive produced Gruen Sweat, which won the Rose D’or 2013 for Best Entertainment Program and series 4 of The Gruen Transfer, which won the 2012 AACTA Award for Best Light Entertainment Program. She also conceptualised, executive produced and directed Country Town Rescue, a six part OB documentary series for ABC TV.

The work of Yugoslavian performance artist Marina Abramovic has tapped into this same theme, especially her 2010 exhibition 'The Artist Is Present' at New York’s Museum of Modern Art.

She sat at a table in the museum and invited spectators to sit across from her and keep her gaze.

At one point during the 736 (yikes!) hours of performance, Abramovic’s former partner unexpectedly sat down... and there were tears from the artist, sending video of their emotional reunion viral. Ah, you guys... so emotional! Watch:

To be eligible for filming the SBS series, candidates must be over 18 and available for a three-day shoot between October 31 and December 16. Applications via lookmeintheeye.com.au.

So, what are you waiting for? Are you up for it?

Email ThisBlogThis!Share to TwitterShare to FacebookShare to Pinterest
Labels: Australiana, Emotional, Everyone is talking about, SBS TV, This Just In