Michael Moore, the outspoken US filmmaker behind 'Capitalism: A Love Story', 'Fahrenheit 9/11', and 'Bowling For Columbine', and author behind 'Dude Where's My Country?' and ' Stupid White Men' has posted a morning after to-do list on social media, and it is going viral.

He also absolutely predicted Donald Trump would win the US presidency. As he indeed did so yesterday.

He said in July 2016 on 'Real Time With Bill Maher': "I am sorry to be the bearer of bad news, but I gave it to you straight last summer when I told you that Donald Trump would be the Republican nominee for president. And now I have even more awful, depressing news for you: Donald J. Trump is going to win in November."
Read more about his spot on prediction below. But first, his morning after strategy. 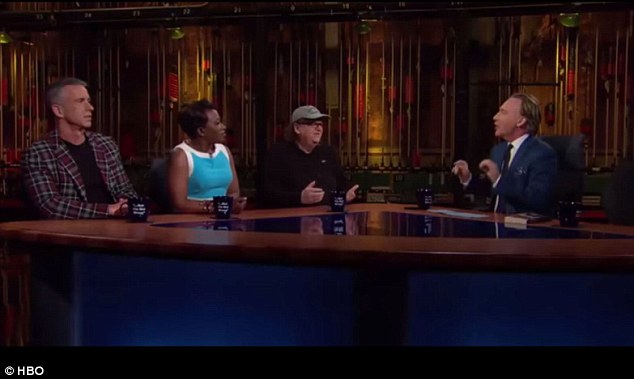 Here it is in full, below:

Morning After To-Do List:
1. Take over the Democratic Party and return it to the people. They have failed us miserably.
2. Fire all pundits, predictors, pollsters and anyone else in the media who had a narrative they wouldn't let go of and refused to listen to or acknowledge what was really going on. Those same bloviators will now tell us we must "heal the divide" and “come together.” They will pull more hooey like that out of their ass in the days to come. Turn them off.
3. Any Democratic member of Congress who didn’t wake up this morning ready to fight, resist and obstruct in the way Republicans did against President Obama every day for eight full years must step out of the way and let those of us who know the score lead the way in stopping the meanness and the madness that's about to begin.
4. Everyone must stop saying they are “stunned” and “shocked.” What you mean to say is that you were in a bubble and weren’t paying attention to your fellow Americans and their despair. YEARS of being neglected by both parties, the anger and the need for revenge against the system only grew. Along came a TV star they liked whose plan was to destroy both parties and tell them all “You're fired!” Trump’s victory is no surprise. He was never a joke. Treating him as one only strengthened him. He is both a creature and a creation of the media and the media will never own that.
5. You must say this sentence to everyone you meet today: “HILLARY CLINTON WON THE POPULAR VOTE!” The MAJORITY of our fellow Americans preferred Hillary Clinton over Donald Trump. Period. Fact. If you woke up this morning thinking you live in an effed-up country, you don’t. The majority of your fellow Americans wanted Hillary, not Trump. The only reason he’s president is because of an arcane, insane 18th-century idea called the Electoral College. Until we change that, we’ll continue to have presidents we didn’t elect and didn’t want. You live in a country where a majority of its citizens have said they believe there’s climate change, they believe women should be paid the same as men, they want a debt-free college education, they don’t want us invading countries, they want a raise in the minimum wage and they want a single-payer true universal health care system. None of that has changed. We live in a country where the majority agree with the “liberal” position. We just lack the liberal leadership to make that happen (see: #1 above). Let's try to get this all done by noon today. -- Michael Moore
This is in line with his eerily accurate prediction as outlined above.
Here is a clip from 'Real Time With Bill Maher' in July 2016, with the transcript below, when he made these predictions:
In a post on his blog that is undated, but published well before the election, he wrote, "I am sorry to be the bearer of bad news, but I gave it to you straight last summer when I told you that Donald Trump would be the Republican nominee for president. And now I have even more awful, depressing news for you: Donald J. Trump is going to win in November."
"This wretched, ignorant, dangerous part-time clown and full time sociopath is going to be our next president. President Trump. Go ahead and say the words, 'cause you'll be saying them for the next four years: 'PRESIDENT TRUMP.'"
Moore's theory, laid out in typical Moore fashion, details what has now proven to be spectacularly spot on: that Donald Trump would win four rustbelt states that Democrats believed they could not lose.
He writes:
"And this is where the math comes in. In 2012, Mitt Romney lost by 64 electoral votes," wrote Moore. "Add up the electoral votes cast by Michigan, Ohio, Pennsylvania and Wisconsin. It's 64. All Trump needs to do to win is to carry, as he's expected to do, the swath of traditional red states from Idaho to Georgia (states that'll never vote for Hillary Clinton), and then he just needs these four rust belt states. He doesn't need Florida. He doesn't need Colorado or Virginia. Just Michigan, Ohio, Pennsylvania and Wisconsin. And that will put him over the top. This is how it will happen in November."
He argued that men, spooked that "a male-dominated, 240-year run of the USA is coming to an end" would be driven to the polls to keep a woman out of office, and that white men, already embittered by eight years of an Obama presidency, would turn out to block her rise. He speculated that Bernie Sanders supporters would not turn out to support Clinton once she won the primary, and he was right about that too.
And he added that people would simply not trust Hillary Clinton.
He also argued that in a nation that had already elected the wrestler Jesse Ventura to high office, frustration would once again rear its head at the polling booth.
"It's one of the few places left in society where there are no security cameras, no listening devices, no spouses, no kids, no boss, no cops, there's not even a friggin' time limit," wrote Moore.
"You can take as long as you need in there and no one can make you do anything. You can push the button and vote a straight party line, or you can write in Mickey Mouse and Donald Duck. There are no rules. And because of that, and the anger that so many have toward a broken political system, millions are going to vote for Trump not because they agree with him, not because they like his bigotry or ego, but just because they can."

He adds in his blog post titled '5 Reasons Trump Will Win':

Never in my life have I wanted to be proven wrong more than I do right now.

I can see what you’re doing right now. You’re shaking your head wildly – “No, Mike, this won’t happen!” Unfortunately, you are living in a bubble that comes with an adjoining echo chamber where you and your friends are convinced the American people are not going to elect an idiot for president. You alternate between being appalled at him and laughing at him because of his latest crazy comment or his embarrassingly narcissistic stance on everything because everything is about him. And then you listen to Hillary and you behold our very first female president, someone the world respects, someone who is whip-smart and cares about kids, who will continue the Obama legacy because that is what the American people clearly want! Yes! Four more years of this!

You need to exit that bubble right now. You need to stop living in denial and face the truth which you know deep down is very, very real. Trying to soothe yourself with the facts – “77% of the electorate are women, people of color, young adults under 35 and Trump cant win a majority of any of them!” – or logic – “people aren’t going to vote for a buffoon or against their own best interests!” – is your brain’s way of trying to protect you from trauma. Like when you hear a loud noise on the street and you think, “oh, a tire just blew out,” or, “wow, who’s playing with firecrackers?” because you don’t want to think you just heard someone being shot with a gun.

In the interview with Bill Maher nearly six months ago, he also says:

“I think Trump is going to win. I’m sorry,” And as the crowd booed his comments, host Bill Maher said Moore was doing the right thing by speaking out.

“Boo if you want. The enemy is complacency,” Maher predicted accurately.

According to Moore, Trump’s best chance at winning the general election lay in Middle America. “I live in Michigan. Let me tell you: it’s going to be the Brexit strategy,” Moore said, before then going on to compare the middle of England to Michigan, Wisconsin, Ohio, and Pennsylvania. “Mitt Romney lost by 64 electoral votes,” Moore said. “The total electoral votes of those four states in the Rust Belt: 64.”
Moore has been more than vocal about Trump many times before.
He has called him a fascist in an interview with 'The Guardian' earlier this year.
He has also stood outside Trump Tower in New York with a sign that read “We are all Muslim.”, in line with Trump stating he would ban Muslim immigrants from entering the United States if he were to be elected president.
Michael Moore and Bill Maher also discussed Donald Trump in an interview back in May, when the pair decided they would join forces to stop Donald Trump’s road to the White House.
“You and I are going to take him down. You and I,” Moore told the host of Real Time on Friday night’s episode. “No, seriously. This is the end of Donald Trump. He is not going to the White House.” Maher added, “You tell me where to show up, I’ll be there.”
When Moore sat down for an interview on Maher’s show, the host asked, “From now until the election — I’m just gonna ask everybody on this show, I don’t care if it gets boring — how do we stop Donald Trump?”
Here is that clip: 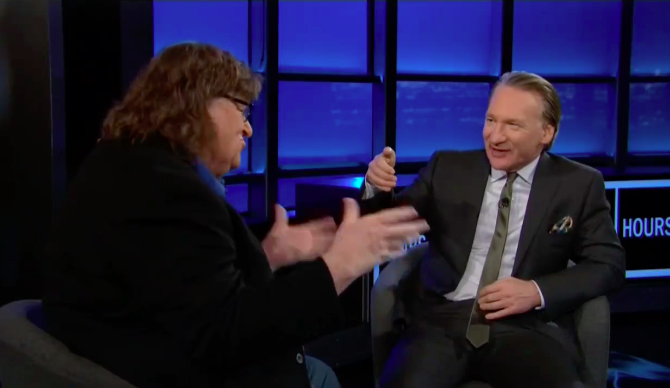 Email ThisBlogThis!Share to TwitterShare to FacebookShare to Pinterest
Labels: Americana, Everyone is talking about, Politics, This Just In