Breaking news... the Ariana Grande concert has had confirmed fatalities via Manchester Police.

UPDATED: reports are suggesting as many as 20 people have died. More to come...

UPDATED: At least 19 people are dead and at least 50 people are injured in a possible terrorist attack.

Nineteen people have been killed and about 50 injured in a blast at Manchester Arena, police have said.

Witnesses said they heard two loud bangs, reported to be in the foyer, after a pop concert by Ariana Grande.
Greater Manchester Police said there are a "number of confirmed fatalities and others injured".
The cause of the explosion is unknown but the North West Counter Terrorism Unit is treating it as a possible terrorist incident.
BBC Home Affairs Correspondent Daniel Sandford said senior counter-terrorism officers are assembling in London and are liaising with the Home Office.
He said early estimates put the number of fatalities in double figures, although these are not confirmed.


Manchester Victoria station, which is close to the concert venue, has been closed and all trains cancelled. British Transport Police say explosion was in the foyer area of Manchester Arena. 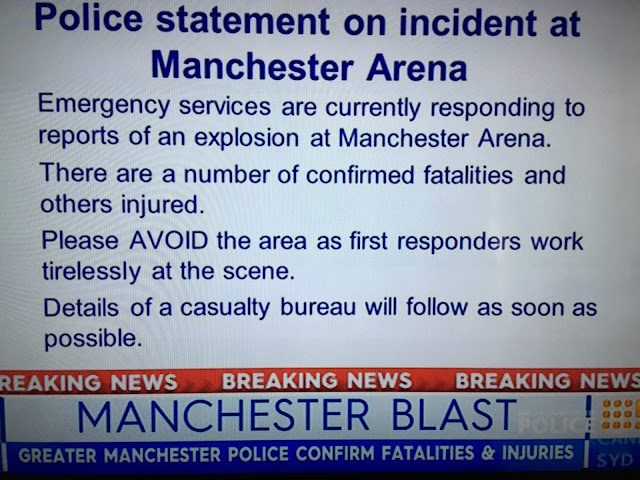