They've had a whirlwind romance, and now... they're married. 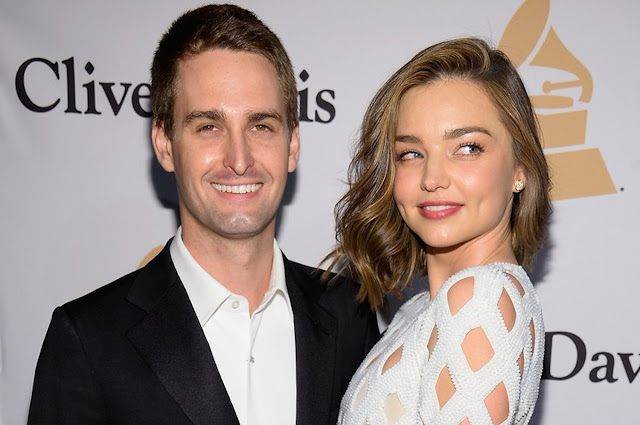 Evan is the Snapchat CEO, and the couple tied the knot in front of family and friends at their home in Brentwood, California on Saturday (US time).

The wedding had less than 50 guests.
"It was a small intimate wedding," says a source, who added that the bride looked regal and like a "natural princess", it was reported in this article.
In addition to being an intimate affair it was also an emotional one. Both the bride and groom had tears in their eyes, according to the insider from the report.
"The vows were beautiful," says a wedding guest.
The uber successful Australian model - Josie's Juice first met Miranda in the year 2000 when she was a model at the launch of 'The Body Shop' cosmetics line - announced her engagement to the expert and savvy tech mogul after one year of dating Miranda.

"He's just a really kind person and very genuine and very authentic and I really appreciate that about him," she explained before adding, "And also, he's very intelligent."

This is the second marriage for Miranda, who was previously married to actor Orlando Bloom for three years.

They married in 2010 and then split in October of 2013. The two have one child together, a son named Flynn

This is the first marriage for Spiegel.

In another article in E! News, Miranda did admit she's open to the idea of expanding her family with her new hubby.

"I am very content with having just one [child], but I am definitely open to the possibility of having more. [Flynn] will often say, ‘My friends have brothers or sisters, will I have a brother or sister one day?' I say, ‘Maybe, honey.'"