It's all about the bottom and the Aussie flag at Eurovision.

It's definitely ALL about the winner, Portugal - first time winner, too! Well done to Salvador Sobral and his winning song 'Amor Pelos Dois'.

Here is the winning song:

And his first interview:

BTW, the guy who has bum on show for the world to see... not actually an Aussie.

He is 'serial pest', and actually a journalist: Vitalii Sediuk, described as a Ukrainian media reporter and personality.

Here is THAT clip:

His list of assaults is VERY long, stating with a 1 September 2011 act where he baited singer Madonna at the 2011 Venice Film Festival, handing her a bouquet of hydrangeas knowing she did not like them, then causing her to express her disdain unknowingly in front of the press, creating controversy about her apparent snobbery towards a gift from a fan.

He's also the guy who kissed Will Smith at the premiere of 'Men In Black', where Will slapped him and asked "What the hell is your problem, buddy?"

He's the 'pest' who crashed Adele's Grammy awards moment in 2013, grabbed Bradley Cooper around the legs at the SAF awards. He also buried his face in Leonardo DiCaprio's groin before being removed by security.

At the 2014 Cannes Film Festival, he crawled under the gown of actress America Ferrera as she posed for photographs at the premiere of 'How to Train Your Dragon 2'.

On 25 September 2014, Sediuk allegedly shoved Kim Kardashian nearly forcing her to the ground if not for the assistance of her bodyguard, Pascal Duvier. He later released the following statement:  "I hope Kim is ok and won’t be mad at me as I didn’t mean any harm. Kanye is one lucky man as Kim is a goddess!"

He also turned up at Valentino's Paris Fashion Week Show, stripped down to G-banger
and hugged singer Ciara before he was pulled away. He was not charged for the incident.

That Miranda Kerr incident, where she attended the Louis Vuitton runway show in Paris, and a boldly dressed Sediuk snuck up and kissed her on the cheek.

Then came the incident where Sediuk snuck up behind model Gigi Hadid and lifted her off the ground, before being elbowed in the face by Hadid. After the incident, he confirmed to The Hollywood Reporter that it was indeed him; he claims his motives behind the attack were due to his belief that Hadid is not a true high fashion model. Well okay then...

And now last night: singer Jamala was performing her song, "I Believe in U" when Sediuk ran onto and around the stage whilst flashing the crowd and cameras draped in an Australian flag. 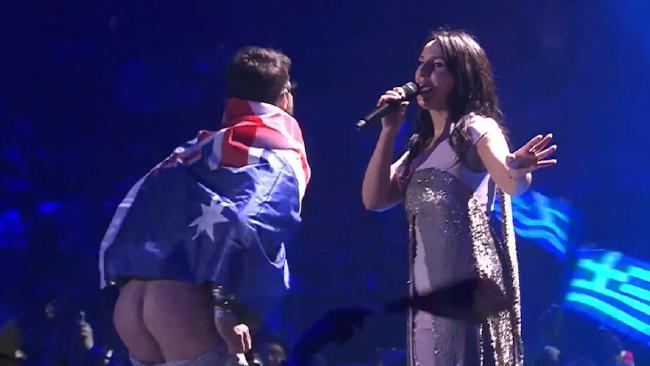 With his song 'Don't Come Easy', he was GOOD! 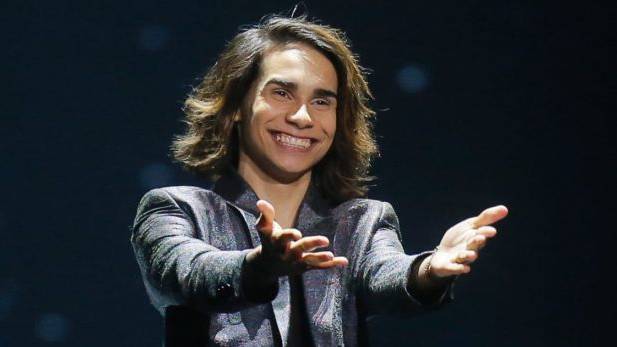