"As I stood in the centre of the SCG on Thursday night, at the spot where my little brother played his last shot, I struggled to comprehend how this tragedy could happen to one of life’s true characters and gentlemen.

I resolved then and there to write this tribute to Phillip Hughes. 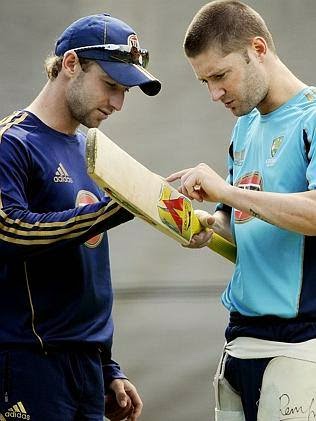 I want to use the occasion of this, his 26th birthday, to shine a bit more light onto Phillip — the man he was and the life he led — which will help explain the extraordinary outpouring of support from inside, and outside, the world cricket family.

His cricketing achievements — of which there were many — really play second fiddle to the human qualities that he exhibited.

Loyal to a fault, eternally optimistic, kind hearted, wicked sense of humour, a child like verve for life … I really could go on and on.

Sitting with his parents Greg and Virginia, sister Megan and brother Jason over the past few days it struck me that above all, he was a family man.

He was always incredibly proud of his family and the upbringing he had.

He was a country boy at heart, with honest values and a work ethic second to none. And it is easy to tell where those qualities come from.

His parents are salt of the earth Aussies, who have handled the past several days with a dignity and grace I could only admire. They will have my support, and the support of the entire Australian cricketing family, whenever and wherever they need it.

I met him as a boy of 17, when he came down to Sydney from Macksville to play for my club Western Suburbs.

I was drawn to him instantly, falling for his cheeky grin and love of life.

Phillip truly was uncomplicated — what you saw was what you got.

I don’t think in 12 years of playing cricket at the top level I have ever come across a more loyal or generous-hearted teammate.

Whenever Hughesy suffered adversity — if he was replaced in the team or if he wasn’t scoring as many runs as he wanted — he never dropped his head, never once complained.

If he had a tough conversation with a selector he would nod, agree he needed to work harder, grin because he felt bad for the person delivering the message and then get on with it.

You knew deep down he was shattered because playing cricket for his country meant everything to him.

But his head wouldn’t drop because he knew his teammates didn’t need that — he was honoured to be running drinks as 12th man for his mates and he went out of his way to show that.

But Phillip’s laid-back nature disguised something more important about the man. He was as mentally tough as they came.

That toughness was evident in the way he approached the craft of batting.

It is easy to forget just what a prodigious talent he was.

He may not have had textbook technique — show me someone who does — but what this man could do is score runs for fun.

At only 25 years of age he had 26 centuries to his name in first class cricket, and I have no doubt he would have made it 27 last Tuesday.

What an amazing talent.

I said a couple of months ago that I had no doubt Phillip would have gone on to play 100 tests, such was his determination and skill.

When he was last dropped from the Australian team he knuckled down, worked on parts of his technique that he felt could be improved and he peeled off century after century for South Australia.

He lit up like a beacon again for the selectors to not help but notice.

He also had a knack of making people laugh. I remember the last time we batted together: we would meet in the middle of the pitch and I would be asking him whether the ball was moving in the air or off the deck.

All he could do was talk about his cattle. What that man didn’t know about cows wasn’t worth knowing.

He was a world champion at expressing the smallest facts about Black Angus in particular.

He loved them so much he was trying to convince me to run a herd of them on my own farm.

When we were on tour every night on the way to his room he would come past mine to steal my liquorice.

I used to say to him constantly: “What’s mine is yours, mate”, which he took as licence to nick my one vice.

I heard a mate a few days ago refer to Phillip’s life through this line from an old military poem and I think it perfectly sums him up:

“One crowded hour of glorious life is worth an age without a name.”

Phillip was taken from all of us way too soon, but his attitude to life, his achievements on and off the field, and the hundreds of friends he made along the way all demonstrate that he did indeed live a crowded hour.

That his career, and his life, was cut short in his prime is incredibly unfair.

I don’t have a blood brother, but I am very proud to have called Phillip my brother. I am a better man for having known him.

Vale Hugh Dog. I will miss you forever, but I will not forget. Happy birthday bro."
Michael Clarke.

Here are the social media birthday messages from Michael Clarke and from his wife Kyly Clarke: 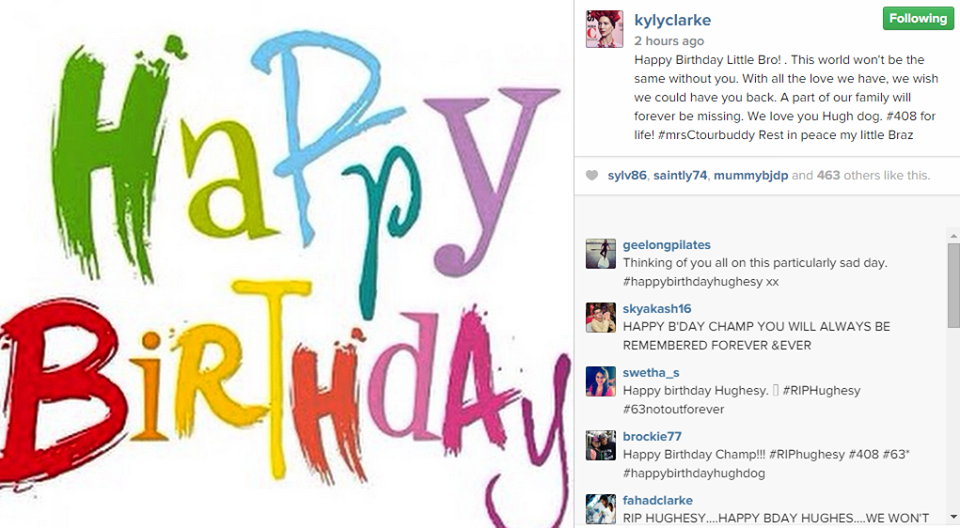 Email ThisBlogThis!Share to TwitterShare to FacebookShare to Pinterest
Labels: Australiana, Emotional, Sad, Sport, This Just In