Following Prince’s death footage of the icon kicking Kim Kardashian off his Welcome 2 Tour stage has resurfaced. It's not that long ago, really. You'll remember it. 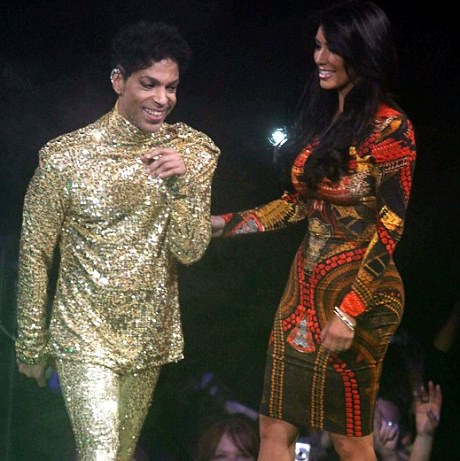 The video was taken at a February 2011 performance inside New York’s Madison Square Garden, showing Prince skimming the crowd for a woman to bring onstage. He selects Kim, who makes her way from the crowd to the stage in a form-fitting dress and stilettos, awkwardly standing next to the pop star for a few moments as he breaks into a series of dance moves.
Kim then places her arm on the singer in an attempt to stop him from performing. “Get off my stage,” he says, dismissing her for remaining motionless as he continues to dance. The crowd cheers. “I need a dancer!”
The reality star tweeted about the incident shortly after it happened, blaming nervous energy for her behaviour.
See the video here:
Posted by Josie at 01:45