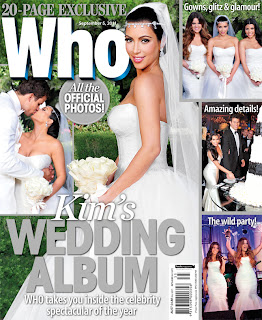 On newsstands tomorrow, Australia's Who magazine (sister publication to US People magazine) presents a special issue featuring the celebrity wedding of the year, between Kim Kardashian and pro basketballer Kris Humphries. And we get to ogle - and pick apart - all the pics.

With three couture Vera Wang gowns, 50,000 flowers and $15 million worth of diamonds, the reality star married her "perfect" guy in a dream wedding that was unabashedly grand. And perfectly made-for-TV.

"I was speechless," says Kim of the day she painstakingly planned for three months (sister Khloe has openly said Kim has planning this day from the moment she was born). "It was like we were in heaven."

The photos (with a cover that, I think rivals the US People mag cover; see here: http://josiesjuice.blogspot.com/2011/08/kim-kardashian-people-magazine-wedding.html) feature all three Vera Wang dresses, from the full-skirted tulle confection to the show-stopping old Hollywood-inspired gowns.

For traditional girls planning their wedding, it's all about the details, and the mag features all the jewels, including the Lorraine Schwartz $15 million dazzling diamond pieces for the bride's day, including an Audrey Hepburn-inspired headpiece, a bracelet with the couple's K and K initials entwined (the groom's gift to his bride) and blinged-up wedding bands.

Plus, photos of the after party for those who really, really want to witness the whole shebang.

Who magazine is onsale tomorrow until Thursday next week.