And so, the celebrity "fat shaming" continues.

It has been several weeks since 'subtle as a sledgehammer' comments making fun of Kim Kardashian's pregnant body have become "a thing."

Paparazzi photos of the reality star with her growing belly are in high demand, though a sad by-product of this has been the comments about her fashion choices [that's not exactly the end of the world, I know], but primarily about cruel fat taunts. 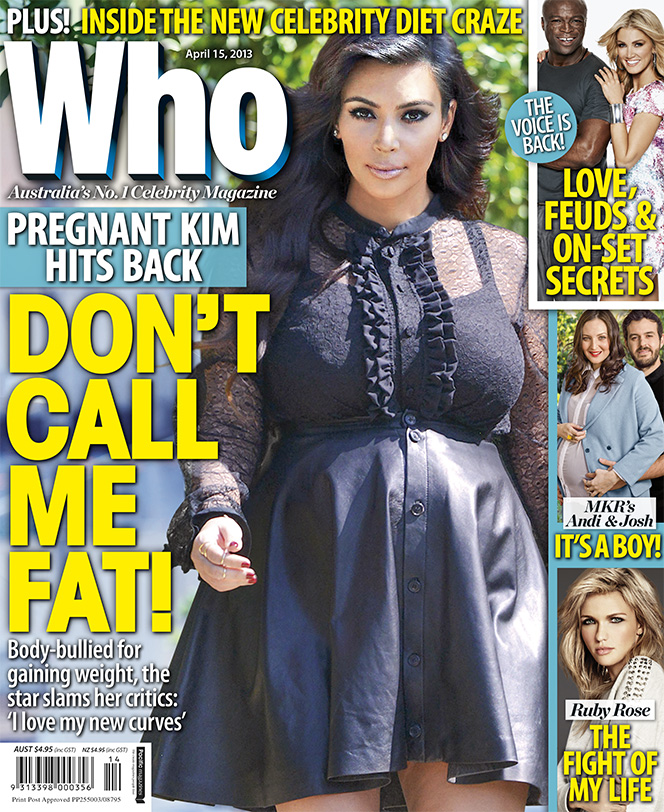 With comments about her “fat ass”, and photos of her "pigging out,” Kim says she’s embracing her new pregnant body, and so is her partner and baby daddy Kanye West.

“I think it’s bully-ish to call a pregnant woman fat,” says the reality-TV star, as her sisters and model Helena Christensen offer support. Kim believes now that her belly has popped out a little more, “it’s a really sexy thing,” and her boyfriend “loves” her new curves.

And actor Channing Tatum's wife Jenna has just declared on Twitter that women should "be kind" to pregnant women, rather than focusing on weight gain and fashion choices.

Email ThisBlogThis!Share to TwitterShare to FacebookShare to Pinterest
Labels: Celebrities, Kardashians, Magazines, This Just In, Who magazine