'Breaking News Consumer's Handbook', from 'On The Media'

This PDF is the most accurate and intelligent information that should be disseminated today in light of the Sydney siege, unfolding in Martin Place: 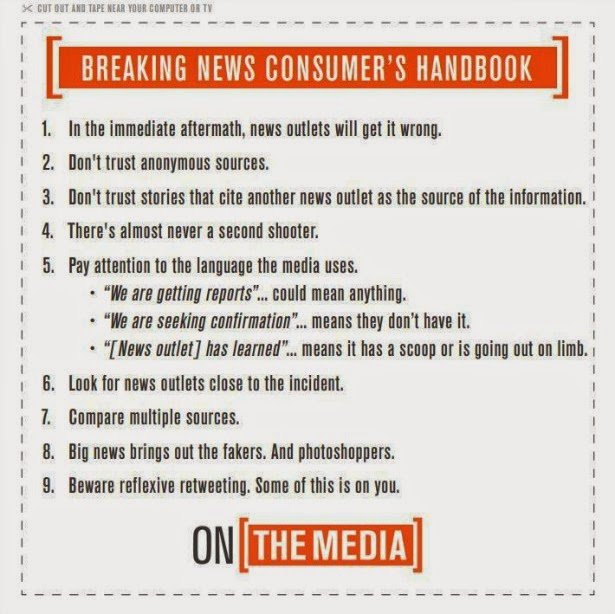 The full article it came from is below, and is titled 'The Breaking News Consumer's Handbook', from the site 'On The Media'. It was written on Friday, September 20, 2013 by Alex Goldman.

Here it is cut and pasted below (link to original article is also below):

This week's shooting at the DC Navy Yard was the latest in a long string of breaking news reporting to get many of the essential facts wrong.
In fact, the rampant misreporting that follows shootings like this is so predictable that OTM has unintentionally developed a formula for covering them. We look at how all the bad information came out. We suggest ways that the news media could better report breaking news. This time, we're doing something different.
This is our Breaking News Consumer's Handbook.  Rather than counting on news outlets to get it right, we're looking at the other end. Below are some tips for how, in the wake of a big, tragic story, you can sort good information from bad. We've even made a handy, printable PDF that you can tape to your wall the next time you encounter a big news event.

1. In the immediate aftermath, news outlets will get it wrong.

Everyone we talked to made this point. Details on the ground will be sketchy, a shooter may still be active, all the dead may not be accounted for. "whatever you might hear in the first couple of hours after a major news event, you should probably take it all with a grain of salt," says Andy Carvin, senior strategist on NPR's Digital Desk. "It’s quite possible that what you hear as the news stories the next morning – what they focus on might be quite different than the day before."

Often, news outlets will cite "sources," or a "law enforcement official." "I think you need to be very careful," says Ian Fisher, assistant managing editor for digital operations at the New York Times. "[law enforcement official] could be anything from the FBI to a cop in a car. So you just don’t know and you shouldn’t really trust that."

3. Don't trust stories that cite another news outlet as the source of the information.

"Also be wary of organizations that blindly quote other organizations without solid sourcing," says Fisher. "They aren’t taking a very big chance in doing that. They can always say 'oh, that was them, not us.' So I think that they are a lot less choosy and careful than they would be if their own reporting was attached to it."

In the case of the DC Navy Yard shooting, the Sandy Hook shooting, and many others, initial reports included possible second and third shooters. “There’s pretty much never another one,” says Fisher. “So if you hear that, you can almost always discount."

5. Pay attention to the language the media uses.

Whether you realize it or not, the language the media uses tells you how reliable it is. Here's a helpful glossary:

6. Look for news outlets close to the incident.

"What you want to do is ask yourself who is close enough to this situation," says Craig Silverman of Poynter's Regret the Error column. "In an incident of terrorism or shooting or even when it’s sort of weather focused in a specific area, that’s always your preferred source. Have they actually seen it with their own eyes? Are they actually there, and do they know the area? Really, really, important."

"If a news organization says 'we can confirm that such and such has happened,' pay attention to what the other networks are saying." says Andy Carvin. "Because ideally you can triangulate that information and get to some nugget of truth. But the fewer examples you have of entities claiming that something has happened, the more wary you should be about it."

8. Big news brings out the fakers. And Photoshoppers.

"There are lots of hoaxsters who know that in this moment people are just grabbing onto any images they can find," says Craig Silverman. "So they might Photoshop something and send it out. Or images that were taken previously find their way to be presented as if they're new. If it’s somebody who’s sharing a photo on twitter, it’s very possible that that photo isn’t one they actually took themselves. You also need to kind of triangulate and see, well, 'has anyone else shared that, and are they giving me a link that I can go to, to actually learn more about this?'"

9. Beware reflexive retweeting. Some of this is on you.

Thanks to Twitter and Facebook, you are a repeater and reporter of information, both good and bad. It is up to you to apply scrutiny to the information you encounter to avoid passing amplifying the same bad information you hope to filter out.
To read the original article, go here.
Posted by Josie at 16:24

Email ThisBlogThis!Share to TwitterShare to FacebookShare to Pinterest
Labels: Australiana, News, Sad, This Just In