'Made In Italy With Silvia Colloca' - SBS ONE, starts November 2014

Silvia Colloca - I am a HUGE fan. How can I not be? She's Italian-born, cooks, and is smart and beautiful. That ticks all the boxes for me. (We wrote about her here).

Here is Silvia in a photo taken from her blog page, Silvia's Cucina: 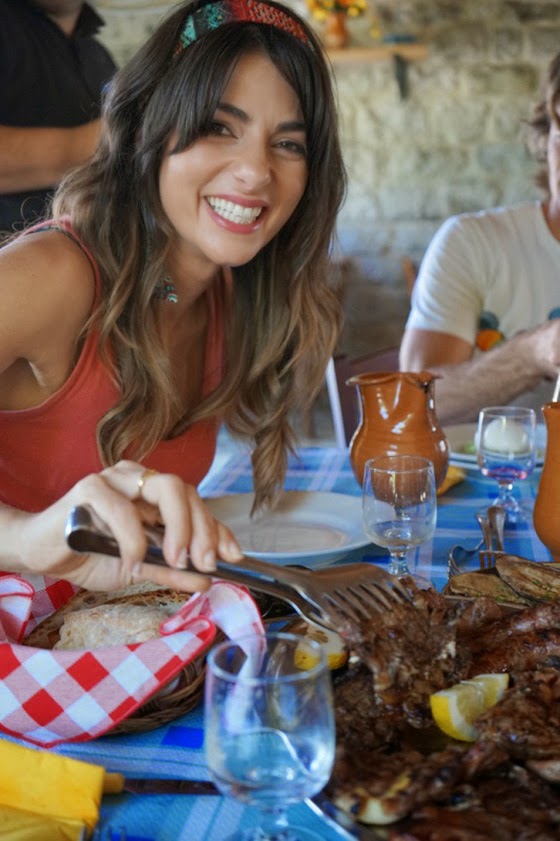 And she ticks all the boxes for the viewing and reading public too, it seems.

With her new show Made In Italy with Silvia Colloca premiering on Thursday 27 November at 8pm on SBS ONE, Silvia sat down with Josie's Juice for an interview to talk her new show, her boys (and that includes her Australian actor husband Richard Roxburgh, as well as her two Italo-Australian sons), and all about mangier (eating) and cibo (food).

Pull up a chair and be entertained by the delicious Silvia - and her mouth-watering, super simple, artisan Italian recipes and cooking tips.

Josie's Juice: There are great expectations with traditions being upheld in the Italian culture. Which we try to uphold in Australia, but it’s kinda hard, and it’s hard in Italy too…

Silvia Colloca: Things have changed so much… so much. The family structure is a bit more fragmented I suppose…

JJ: That’s why I love what you do… We are still so engaged and enchanted with the Italian culture…

JJ: Do you find that?

Silvia: I do, I do find that. It’s so fascinating. I guess being an Italian person you take things for granted.

JJ: Tell me all about your journey to Australia?

Silvia: I became an Australian citizen last year. We moved her permanently five years ago.

We first moved to London together. We used to come here for Christmas holidays or if Richard was working here.

My first son (Raffaele) was born here and then we moved to London; when the financial crisis hit we packed our bags and came here and it was quite brave because by that time I had changed countries several times.

JJ: You've completely embraced a new way of life, an Australian way of life, and you'd made this transition from acting and opera singing to cooking...

Silvia: I don’t lnow that it’s a transition; it’s just a new thing. I've never thought that you only have to wear one hat and I know that a lot of people want you to just wear that one hat because it’s a lot simpler to put you in that one 'box'.

You know, 'Oh she’s that European actress and she’s got that funny accent'. You know, that’s easier for someone to identify a person.

I remember when I was doing opera and acting and the opera world was frowning upon it. You're either one or the other, and I was like, no, I am sorry. Why, why? Who says that? Do I have to be one or the other?

And I sort of understand what they meant. Opera singing requires such dedication that it’s a bit tricky to do more than just that.

It depends on what your ambitions are; I didn’t want to sing at the MET, I just wanted to sing opera whenever I could. I never wanted to win an Oscar; I just wanted to act because I love it and I if could make a living of it, great.

You just set your goals because you love the things that you do and then there’s no pressure to achieve greatness.

It was the same with cooking; I've always loved cooking and always enjoyed it enormously though it wasn't anything special being an Italian woman - I am like everybody else in Italy; we all cook, just as I did in Italy.

It was only when I moved here and to England that friends and family were like, so amazed at what I did in the kitchen. It really confused me; you know my cooking is really simple, there’s nothing elaborate or chef-y about it but I think it is because at this point there is a return, thank God, to things that are a little bit omore humble.

JJ: How did the TV series evolve? SBS perfect - it's the home of TV multiculturalism!

Silvia: It’s the perfect home for me, I’ve become so the wog girl, it’s great!

I was working in my first book Silvia’s Cucina and someone had seen my book and found my blog. I had a meeting and then a few months later, it all started happening.

On the same week my first book was published, two days later the show got commissioned and it was also my wedding anniversary!

We have also decided to do a second book to tie in with the TV series.

This last 12 months has been mental. So much recipe testing! We went location scouting in March. I devised the concept of the show so that we would go back to my mum’s region. We got back to the show and shot the show in May.

It's more than just food. I always think that food in Italy is just an excuse to gather and celebrate life to be honest it’s never so much about the food because they can happily just have pane e olio or a little bit of salame and chunks of pecorino and that’s all we want, as long as we get to sit around the kitchen table and chat and talk about life.

I have two boys, they’re very Italian but a really good blend of Australian and Italian. When we go to Italy they transform into these Italian boys. Their names are Raffaele and Miro.

JJ: Are they super proud of what their mum has done? And in years to come I think all the boys, all your sons' friends, will be coming to your place to eat!

Silvia: Maybe they will (laughs). What I love is that no-one gives a toss about (my identity) where I live.

JJ: I love that you use the phrase "no-one gives a toss." So Aussie! What has captivated you about Australia?

Silvia: There’s a combination of things. Definitely the lifestyle. I mean, I grew up in Milan in a two bedroom apartment. Although Milan is full of opportunities and it’s exciting but the lifestyle that my kids have here is something that I could only have dreamt about when I was a kid. You know, we live in the Northern Beaches and we have a backyard and I grow veggies in my veggie patch - it’s something that most of my friends and family in Italy will never have because it’s a different life.

When my mum and dad come over it makles the distance bearable because they know I have a good life.

They're also very aware that all the opportunities that I have been able to grab here and make work for me would not happening in Italy because there, it is not a meritocracy, not at all.

Oh yes, I am going to be completely upfront here, there is so much corruption in all the entertainment industries. I used to work I acting and my goodness it was hard to even get through the door with an audition because the daughters of this and that got preference, and it’s what happens. And the few people how stand out without recommendations are rare.

Yes, Australia is a meritocracy. That is, you work hard and you get a chance.

Made In Italy with Silvia Colloca premiering on Thursday 27 November at 8pm on SBS ONE.