Charlie Sheen revealed he is HIV positive overnight in an exclusive (US) TODAY interview with Matt Lauer.
"It's a hard three letters to absorb. It's a turning point in one's life," the 50-year-old actor most famous for TV series 'Two and a Half Men' said.
Here is the exclusive to (US) Today clip:
Sheen said he made the announcement to end the smear campaign and extortion.
"I have to put a stop to this onslaught, this barrage of attacks and of sub-truths and very harmful and mercurial stories that are about me, threatening the health of so many others that couldn't be further from the truth," he said.
But "Charlie does not have AIDS," said the actor's physician, Dr. Robert Huizenga, an associate professor of clinical medicine at the University of California, Los Angeles. See the clip here:


In this clip, he talks finances, supporters, and how he broke the news to those closest to him:

Sheen said he told ex-wives Denise Richards and Brooke Mueller about the diagnosis when he found out. He also shared the news recently with his oldest daughter.
"It hit her hard, but she recovered. She's tough like her dad," he said. 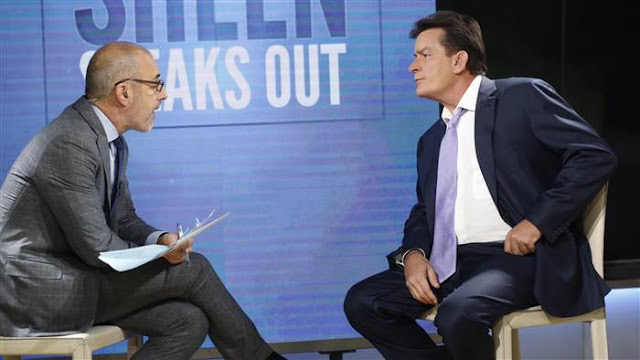 Email ThisBlogThis!Share to TwitterShare to FacebookShare to Pinterest
Labels: Celebrities, Discussion, Everyone is talking about, Health, This Just In