Oscars 2016 host Chris Rock went hard on the wit factor in a year when #OscarsSoWhite was trending, in opposition to NO nominees of colour for the year's awards show.

In his opening monologue at the 2016 Academy Awards Chris went in immediately addressing the race-equality issues plaguing this year's Oscar noms.

Watch the clip they will all be talking about:

Some take away pearlers:

- On why he didn’t boycott the Oscars on principle: “The last thing I need is to lose another job to Kevin Hart!” - Guffaws all 'round. True, that. He busy, that Kevin.

- Chris said that other years, black people didn’t protest the Oscars because they were “too busy being raped and lynched to care about who won Best Cinematographer. When your grandmother’s swinging from a tree, it’s really hard to care about Best Documentary Foreign — Short.” - Oh my, breaktaking.
- “Jada [Pinkett-Smith] boycotting the Oscars is like me boycotting Rihanna’s panties — I wasn’t invited!” - Best. Line. Ever.
- Chris also made fun of the #askhermore movement to query women on the red carpet about more than their outfits; he joked that the only reason men are asked more is that their looks are boring. “If George Clooney showed up with a lime green tux on and a swan coming out his ass, somebody would ask, ‘What’re you wearing, George?'” - Yesss. Someone finally said it.
LOVE THIS MAN! 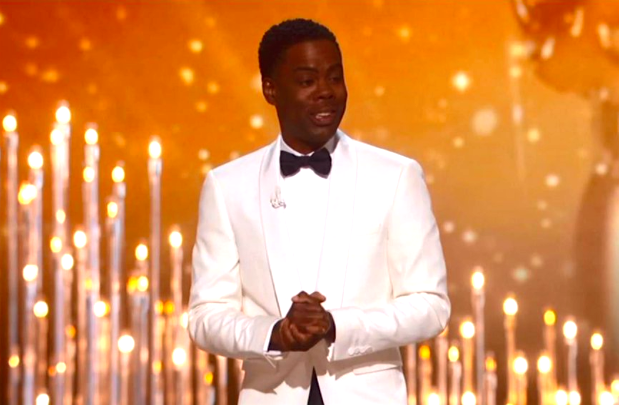 Email ThisBlogThis!Share to TwitterShare to FacebookShare to Pinterest
Labels: Everyone is talking about, Oscars, This Just In