Antonio Banderas and Melanie Griffith divorcing after 18 years of marriage

They have just released this statement:

"We have thoughtfully and consensually decided to finalize our almost twenty years marriage in a loving and friendly manner honoring and respecting each other, our family and friends and the beautiful time we have spent together - Melanie & Antonio".

The couple have been married for 18 years and have one daughter together, Stella, 17.

Griffith has cited irreconcilable differences as the reason for ending her marriage and is asking for spousal support.
According to TMZ, who first broke the story, the breakup is amicable.
This will be Griffith's fourth divorce; she was married to Don Johnson in 1976 for six months; they then split. She then married her co-star from She's in the Army Now, Steven Bauer, in 1982. They were married for five years and had a son, Alexander.
Griffiths later remarried Johnson in June 1989 and they had a daughter, Dakota Johnson (now the star of the upcoming 'Fifty Shades of Grey').
Antonio and Melanie met when they both starred in the movie Two Much.
Antonio was separated from first wife, Ana Leza - and within one month, Antonio and Melanie married. 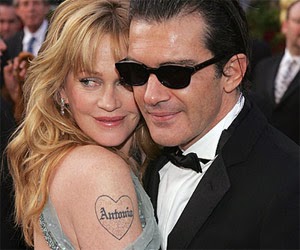