I have been debating for days whether to post something on Bruce Jenner - patriarch of the Jenner/Kardashian blended family - and his apparent gender transition.

I really did want to treat the whole thing delicately as gender transition is obviously such a huge step in someone's life. And while it remains to be seen how the story will be treated on the family's reality TV show 'Keeping Up With The Kardashians', one thing has been confirmed: Bruce Jenner will be speaking to veteran respected journalist Diane Sawyer.

It has been reported that it's likely to serve as a 'walk-up' to Jenner's docu-series that will run on E! this year.

It has also been widely reported the docu-series won't air until 'Keeping Up with the Kardashians' finishes its season – and Bruce gives it an all clear to run.

"He’s our dad so we support him no matter what, and I think when the time is right, he’ll talk about whatever he wants to talk about. I just think it’s his story to talk about, not really mine."

The latest representation of the transgender community comes in the form of the new TV show, 'Transparent'.

Screening last week as a teaser on Channel 9 (and now to continue screening on new Australian paid TV platform, 'Stan'), it shows the transgender journey of a man (played by actor Jeffrey Tambor). After one ep, I was definitely hooked - and can see why it's a recent Golden Globe winner.

But the show's creator Jill Soloway herself was forced to apologise for speculating on Bruce Jenner's gender identity after posting this photo on her Facebook page: 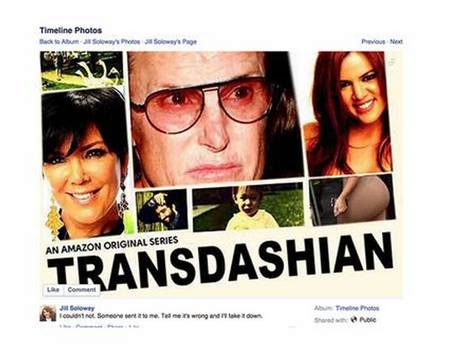 It has since been taken down, and Jill has issued an apology:

Yesterday I saw an internet meme of the TRANSPARENT poster with the faces of Bruce Jenner and family photoshopped in to replace the Pfeffermans," she wrote.


"It was not something we created, but as a long-time Kardashian fan and reality show obsessive, I impetuously regressed to a naïve, teenage self.
"It wasn’t until after I’d posted it on my Facebook page inviting debate that I saw it the way everyone else did: as a cruel mockery of the journey Bruce Jenner may or may not be undertaking.

"I took down the image immediately. Bruce Jenner has not said he is transitioning; his identity is his to share and no one else’s to determine.

"The well-being of the trans community is of utmost importance to me. As a cis woman I will never know what it is like to be trans.

"I acknowledge the hurt and pain of the trans community and welcome their feedback.

"I made a mistake; it was horrible judgment. My complacency is checked and it won’t happen again. Please accept my apology."

Essentially, it means someone's actual gender. It's the rejection of the belief that your gender can change by merely 'thinking' that you're a different gender. So, a cisgender male = a male and a cisgender female = a female.

So much to learn about this delicate topic. But one thing is certain: it needs to be treated respectfully on behalf of all the LGBTI (lesbian, gay, bi, trans and intersex) community.
Posted by Josie at 15:57

Email ThisBlogThis!Share to TwitterShare to FacebookShare to Pinterest
Labels: Everyone is talking about, Health, Kardashians, Men, Pop Culture, Reality TV, This Just In, Women