Em Rusciano on family swearing column: "I love them, they love me - end of story."

Em Rusciano - the very funny, self-described "Comedian. Singer. Writer. TV and Radio Presenter. MC. Mother of two. Fancy Lady." - announced on her Facebook page yesterday that she was now a columnist for news.com.au.

"The unthinkable has happened! I have been given my very own weekly column on news.com.au. I'm just like Carrie Bradshaw, only with less Manolo Blahniks, cocktails, bars… Ok so I am nothing like Carrie Bradshaw.. But still, I have a weekly column! I hope you look forward to it each week. My first one.. Well… Lets just say... I went in hard. ENJOY!"

In the post, she wrote, titled 'Em Rusciano opinion: why I let my kids swear', and in it she says:

"It could be said that parents are required to do three things for their kids: feed them, house them and stop them from swearing like truckers.
It could therefore be said that I am avoiding one of the key tenets of parenthood: I let my kids swear at home.
Truth be told I find it hilarious, especially when they say it at exactly the right time in exactly the right way."
You can read the rest of the piece here. 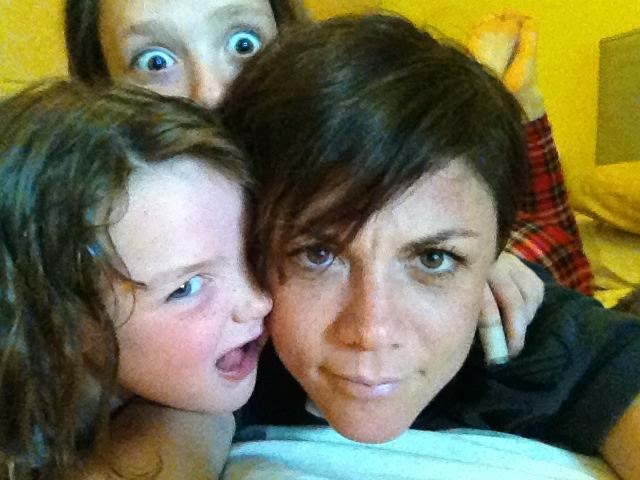 Suffice to say all the breakfast/morning shows and afternoon news show discussed it on their panels - it suddenly became a hotly debated issue, the topic of the day.
So much so that not long ago, Em posted this message on her Facebook page:

"Holy media shit storm batman! You write one little column on how you don't mind if your kids swear from time to time and BOOM morning television hosts are commenting on your parenting methods! First up, the headline of "Em Rusciano is proud that her kids swear" was not my doing and not contextually correct. Unfortunately, there seems to be an alarming amount of people who feel the need to comment on an article they clearly haven't read. Instead choosing to draw their opinion from the click bait headline- which the writer had nothing to do with. At NO POINT did I state that I felt pride should my kids rip out the F bomb at home. I simply said should it happen, it's not a big deal and we move on. I'm not even going to address the "she's a bad mother" comments because that's complete and utter bullshit. My girls and I are rock steady crew, I was up at 4:30am today making lunches and ironing uniforms before getting on a 7am flight to go to work so that they may eat. If that makes me a bad Mother then so be it. I love them, they love me - end of story. Ultimately parenting is all about adapting to circumstances, my girls are imaginative, creative, mostly obedient, polite humans. Policing their language is rarely required and not really a priority. Monitoring their attitudes to weetbix incrusted dishes, that's a different thing. If they don't rinse their dishes- that is when I pull out the zero tolerance gear!

To the man who called me lefty, feminist scum - D'uh! Except for the scum part, that was unnecessarily harsh! To the thousands of you who defended me today, thank you. It means a lot, more than you could ever know. That'll do now, I've had a very long day and a cry in the shower is well overdue. Em x"


What do you think about it all?

I say leave Em the hell alone. I know, I know: she wrote an opinion piece, now others are giving their opinion in response. That's not the bad part - just stop with the name calling and mud slinging. It's really awful and Em seems a (fucking… oops) kick arse mum.

To read more about Em, go to her website here.

Email ThisBlogThis!Share to TwitterShare to FacebookShare to Pinterest
Labels: Controversy, Everyone is talking about, Family, Kids, This Just In, Women