Okay, from the outset, I have a confession to make.

I have NOT read the books.

The publisher sent me all three books when they were first released, and I tried to read the first one, I did. But a few chapters in, and scanning for the dirty bits as all people do, I kinda just gave up. Nothing really engaged me.

These two overused terms were bandied about in almost every article after the books were released. Frankly, (and I speak only for me), if you need written material to excite you enough to go have sex with your husband, there is quite possibly a larger problem at play here. I don't need chick lit to get off. Not that there's a single thing wrong with anyone who does read erotica. Whatever gets you there, cool.

Okay, the writing isn't Pulitzer prize worthy, but author E.L. James has never pretended it is. And I kind of feel like it's now cool to bag the book for the sake of bagging it. How many times have I read on a social media forum: "My 10 year old could write better than that!" (Geez, what is your child reading?!)

Or, the usual line trotted off, laced with this inexplicable anger: "I could have written far better than this tripe!"

Well… did you? Have you? And, had you done so, would you halt a film adaptation of it because it's not award-worthy? I am sure E.L. James doesn't really care what you or I think.

And so, to the casting of the eagerly anticipated film adaptation: how do Dakota Johnson and Jamie Dornan fare as Anastasia Steele and Christian Grey? 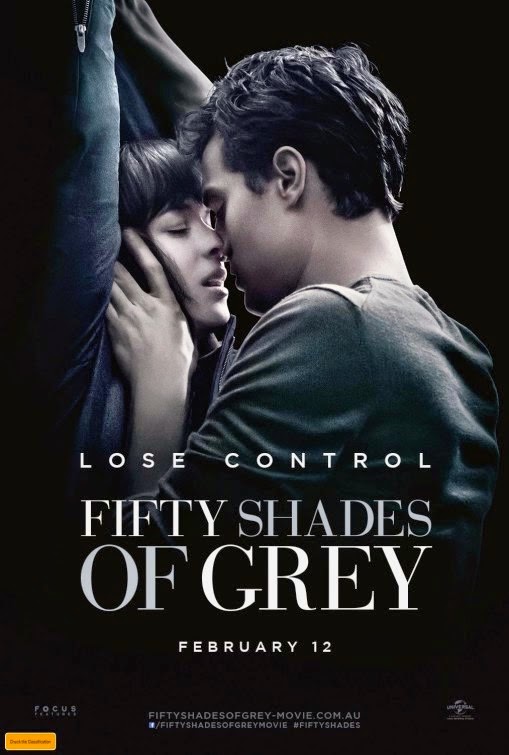 And is Jamie Dornan a good representation of how we all imagined Christian Grey to look? I can't speak for everyone, obviously, but I do think he is. Because I haven't imagined him enough in my head to think he 'should' have been Ian Somerhalder or Matt Bomer. (I also saw a photo shoot Jamie did a while ago and from then, I was convinced he'd be as good a Christian Grey as one can get… and he was). 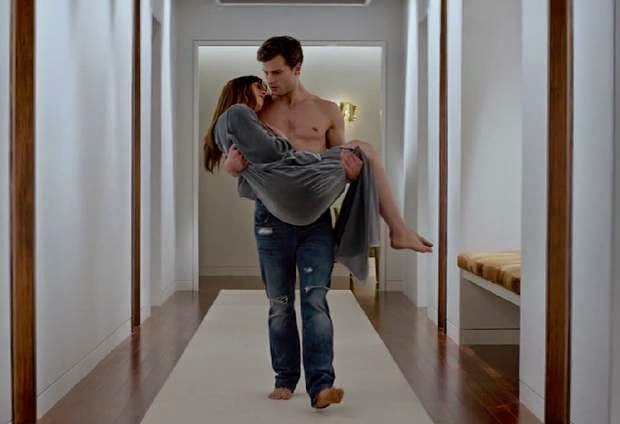 From a purely superficial perspective, Jamie Dornan has a rocking body. I know, I know: what you really want to know is… do we see Jamie completely naked? (You are asking that, aren't you?). Well, you do. His buff body is on display. A lot. And while we see full frontal shots of Anastasia several times, do we see the same of Mr Grey? No. Maybe a split second penis and pube shot. Yes, I was watching that intently. Yes, so was everyone else.

I am also inexplicably pleased to see bush in this movie. Yes, I am. Finally, we have a celluloid representation of pubic hair on a woman which tells me that hair down there is back. And hooray for that. Someone who doesn't lead us to believe that everyone gets a Brazilian wax (they don't). This echoes Cameron Diaz's sentiment in her new book 'The Body Book', in which she says:

"I hear that there's a big fad these days of young women undergoing laser hair removal on all of their lady bits."

"It's a personal decision, but I'm just putting it out there: Consider leaving your vagina fully dressed, ladies."

Yeah. Right on, Cameron. Anastasia, thank you for putting pubes back on the (Tassie) map.

When asked by SMS by several friends what I thought of the movie straight after I left the flick, I was still slightly intoxicated by seeing lots of sex on screen, a sneaky cunnilingus scene, lots of naked bodies, and a small flash of peen. And so, I answered: it's hot, it's sexy, the dialogue is tedious (I know enough about the books' dialogue to know that it can be abrupt and at times, it sounds downright silly), and yes you're likely to drag your partner to see it, and yes perhaps he'll be glad you saw it with him and not your girlfriends.

If you're a single woman and take your friends to see it with you, be warned: there will be lots of giggling and unashamed laughing in plenty of parts in the first half an hour, perhaps even throughout. And not at any of the bits that are meant to be funny. It's more a case of hearing sexy bedroom talk on screen and not knowing what to do with it, which way to look. It just sounds… kinda cheesy.

"I don't make love. I fuck. Hard." Delivered by Christian.

"I don't do romance. My tastes are very… singular." Again, another Christian line.

As the movie wore on, and I sat next to complete strangers (I decided that, seeing as I was covering the black carpet, I'd go to the movie solo), I shifted uncomfortably in my cinema seat in the last 15-20 minutes of the film. Was I turned on or awkward? Nope - I was willing it to be over. Hooow many sex scenes, played in different ways, can one see? Turns out, there is a limit.

Immediately after the movie I spoke to the two ladies who were sitting next to me and they assured me the movie was an accurate representation of the book. And, they'd read all three and were eager to see the next two come to life (it has now been confirmed this is happening).

No, although I actually really enjoyed the movie, and think (female) director Sam Taylor-Johnson did an exceptional job of bringing such a hugely anticipated movie to life (the soundtrack, the sex scenes, her direction - I think she brought the best out of Dakota and Jamie), there is plenty to find 'wrong' about this movie (I say 'wrong' because this is only my opinion. And nobody's opinion on this movie or any other is gospel. People are going a little ape-shit on social media and I for one think we should all just calm the hell down. It's a book. It's a movie).

Okay, so Christian Grey's stalker-ish behaviour is unnerving: turning up unannounced at various times throughout the movie. In real life, you'd be bloody worried about that kind of behaviour, and possibly figuring out ways to break up with the douche.

Seeing Christian become mad as hell on hearing Anastasia is heading to her mother's home without his knowledge is fifty shades of fucked up, and seeing him grab her under the table when he hears her friend Jose (who has declared he has feelings for her) has helped her move house… Calm the hell down, Christian. You don't own her. Oh wait, you think you do, weirdo.

Christian choosing what she wears, and what kind of contraceptive she takes. Fruitloop. Christian being inexplicably shitty and prone to an outburst at any time (I know, I should read the book; I know, he is sexually abused earlier in his life, and there is a back story to that anger). Uncomfortable viewing, Christian. Keep that goddamn anger in check buddy.

It's frankly scary shit and not the kind of relationship I'd have wished for myself as a 20-something young woman. Or one I'd want my daughter to have. Is Anastasia's mother this nonchalant in the book, sheesh! Your daughter is trying to reach out. Do something!

As you now know, the novel is the first in a trilogy by E.L. James. Widely panned by critics but giving those critics the finger by selling more than 100 million copies worldwide, it apparently led to a spike in sales of the kinds of sex aids mentioned in the book and now featured in the film. And it has been suggested that plenty of babies will be born nine months from now. Again, I say: really? You need to see a movie to have a fabulous sex life? Just saying. 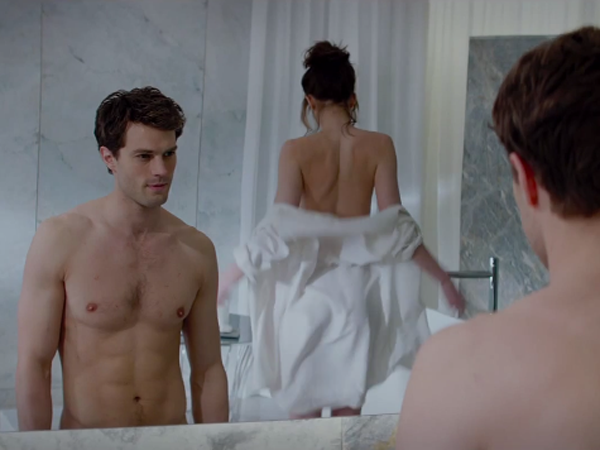 And so, final verdict?

See it, go see what all the fuss is about. You're not going to make much of a statement by boycotting it - if you're truly curious, just give in for crissakes. (If you're steadfastly against it, don't go see it. Nobody is forcing you to). Is it glorified domestic violence? I don't see it that way (I think that's pretty offensive to victims of serious domestic violence). From what I can see, these are two consenting adults, and while Mr Smarty Pants Christian thinks he's mind-fucking her (sorry, there's no other way to say that), Anastasia seems no pushover. And from what I've read, she turns their relationship on its head in the next two books (I know, I know… I have to read them).

But be warned: if you're going to see this movie in the hope you'll be titillated while sitting next to your partner, you might get some way there, but in a packed cinema full of early adopters you're going to come across several groups of women who'll find parts of it hilarious, when it's clear the actors are trying damn hard on screen to turn you on. Even some of the movie's more melodramatic scenes and lines, which fans will know are taken straight from the book, draw much laughter from the audience.

I say go see it AND read the books, then write your own opinion on it all. I promise I won't be offended. And don't be offended by my opinions, either.

Oh, and if you'd like to 'unsee' the Anastasia character Dakota Johnson plays, as a subservient woman, all you need to do is watch this (keep watching… she's there. As a blonde and as mad as a cut snake):

Email ThisBlogThis!Share to TwitterShare to FacebookShare to Pinterest
Labels: Everyone is talking about, Men, Movies, Pop Culture, Relationships, Sex, This Just In, Women