Only a few hours ago Lamar Odom has been reported to be responsive for the first time since being in a coma. 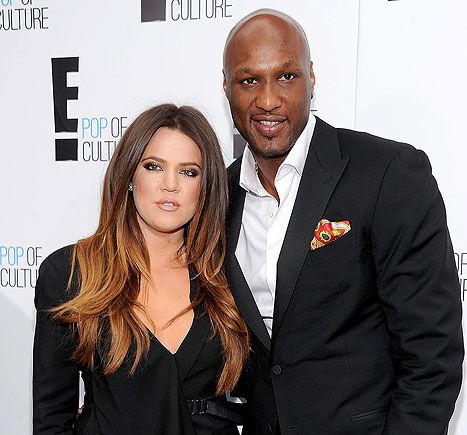 
ET has learned that Lamar Odom has opened his eyes and has been able to communicate.
According to Alvina Alston, a spokesperson for Odom's aunt, JaNean Mercer, the 35-year-old athlete was able to open his mouth and speak on Friday.
When his doctor asked how he was doing, Lamar gave a thumbs up and responded, "Good morning."
Read more here.

They released a statement to ET a few days ago:


"Thanks for your outpouring of prayers and support for our dad," Destiny and Lamar Odom Jr. said in the statement to ET. "We are here with our family and friends. We appreciate everyone respecting our privacy at this time. We ask for your continued prayers."
Lamar has been in hospital for three days, after being found unconscious on Tuesday at the Love Ranch, a brothel in Crystal, Nevada.
His estranged wife is Khloe Kardashian, who has been by his side since Tuesday, with most of her family including her mother, Kris Jenner, and sisters, Kim Kardashian, Kourtney Kardashian and Kylie Jenner, joining her at the hospital.
Lamar suffered a heart attack and organ failure, and was placed in a medically induced coma and on dialysis on Wednesday. He opened his eyes after about 72 hours in the coma, and ET was previously told he was in critical condition.
Earlier, Australian hip hop artists '360' wrote this on is Facebook page:

Wishing all the positive vibes in the world to Lamar Odom right now. He was found unconscious and is now on life support with the decision of whether to pull the plug or not resting with his ex wife. Such a F'd up situation frown emoticon I think its sad that people are throwing shade on Kobe Bryant for "not doing enough to help him get clean". Thats bullshit! For anyone who knows an addict or is an addict themselves you have to understand that NO ONE ELSE can get clean for you, you have to do it yourself. If you're battling with addiction and are forced to go to rehab by friends, family or the law when you're not ready deep down; you WILL relapse.. I really dislike this train of thought because anyone that has lost a loved one to addiction should not feel guilty that they didn't do enough to help. With addiction it takes something like almost losing your life to make you wake the fuck up and want to get better but unfortunately its often too late. If you're an addict and you do want to get clean talk to someone. Don't be ashamed to go to rehab either, i think rehab was one of the best things for me. I lied to literally everyone about my addiction. I hid it and lied to anyone who confronted me about it, it almost killed me. NO ONE KNEW, they suspected something wasn't right but i couldn't bring myself to tell anyone.. I realise now if i had've just spoken openly to someone i could've avoided a lot of heartache and pain. I overdosed and landed in hospital lucky to be alive and since then i've been slowly repairing the damage that was caused. The overdose and near death experience was probably the best thing that happened to me. If you know someone going through that C*nt of a thing that is addiction there isn't really much you can do but be there for them when they really need you.. be the cushion for when they hit rock bottom. I could go on and on about this but anyone struggling with it you're not alone.. and all my fellow recovering addicts - 1 day at a time! ‪#‎JustForToday‬

And prior to that, the Kardashians made their first public statement since Khloe Kardashian’s ex Lamar Odom was hospitalised in Las Vegas.


The Kardashian-Jenner family have published a message across all their websites explaining why they have paused activity on their apps.
"As a family, we’ve decided to hold off on publishing content across our apps while we continue to support and pray for Lamar. Thank you for your kindness and understanding during this difficult time."
The family has also updated their individual social media accounts with messages of support for Lamar.

Email ThisBlogThis!Share to TwitterShare to FacebookShare to Pinterest
Labels: Everyone is talking about, Kardashians, This Just In