I can't recall ever seeing such uniform backlash on a news story, all over social media, such as this one; there has been no division on the matter... every comment I've read is a variation of the same thing. What this woman - Dani Mathers, who won 2015’s Playboy Playmate Of The Year - has done in shaming another on social media has been met with contempt.

When one woman was minding her own business post gym workout, mid change and therefore naked, another decided to take a photo of her with an offensive caption and place it alongside herself looking ill or laughing. Either is pretty darn bad. Even worse: she posted it on Snapchat for all to see.
“If I can’t unsee this then you can’t either,” the 29 year old captioned it.
People were quick to let her know she'd made a HUGE mistake.
Here is the photo (source: Twitter): 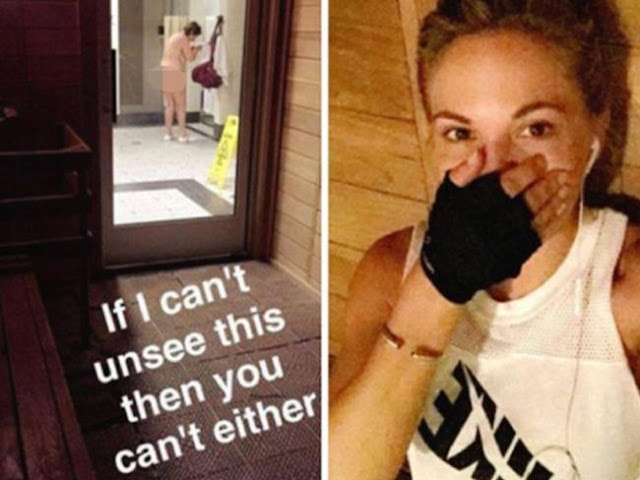 This is her apology:
But the comments on all her social media has been SCATHING.
Such as these:
Lori Wentz Lochbaum There is no filter that could make you pretty when you are so ugly inside!!!!!
Like · Reply · 3,095

Gina Leingang You can be as skinny as you want, but you will always be ugly inside. That will never change. I feel sad for you that the only thing you have is your body and nothing else and that you have to put down others to make yourself feel better! What kind of person takes a picture of someone's naked body and posts for the world to see. It's says more about you as a person than it does about that poor woman! Talk about invasion of privacy!
Like · Reply · 181

Lindsay Shore You are disgusting! I will have you know. Not every one thinks you are "beautiful". I think you are as ugly on the inside as you are on the out. Your face is wide and your mouth is huge. You are NOT as pretty as you think you are.
Like · Reply · 695

Shannon Fiorelli I'm hoping all these negetive responses are getting to you. I want you jailed. You violated that poor woman. Deplorable excuse of a human being.
Like · Reply · 424

Carolynn Kushnir Charges should be brought against you.. in fact.. maybe i'll start the movement? ! Shame on you! Well what do you expect from a woman with no brain cells who's only talent is taking her clothes off for money.. THAT'S the real shame.
Like · Reply · 113

Loveda Warren I really hope Playboy takes the appropriate measures and terminates all ties with Dani Mathers immediately. Body shaming in ANY way should not be tolerated or excused,(especially in the industry we all work in) and to do so in such a malicious and destructive way deserves termination as well as police involvement.
Like · Reply · 9

Millicent Odunze Geers She took and published a photo of a naked person without her consent. She is a sex offender and should be charged and labeled as such for life. And a fellow woman, for heaven's sake. Despicable.
Like · Reply · 1,386

Philip Simonin So not only are you one of the most hideous human beings in the world but you're quite deplorable at best. You fat shamed a woman in a public women's gym bathroom and believe you can't unsee that she is perfectly normal. She has gained weight, yes. She...See more

Sarah Chaara It's good you have a big mouth because you'll be needing it for more than body shaming a beautiful woman and then making up lies. You're everything that is wrong with this world all rolled up nip-n-tucked. People already think girls like you are probably void of substance and just cruel and self absorbed- you just proved them all right. You need to be charged and go to jail. That woman needs to sue you for everything you have. That gym and all gyms should never allow you in and ban you for preying on a fellow patron. Playboy needs to revoke your title. And all businesses and contracts you have should be bill and void or people should boycott them until the remove you. The only thing you're going to be left with is knees pads and floss. #Prison4DaniMathers
Dani's Facebook page is here, and each and every pic has these kind of comments.
Wow.
Posted by Josie at 23:56