Taylor Swift has weighed in on Kim Kardashian leaking snippets of a phone conversation Taylor had with Kim's husband Kayne West on Snapchat, which showed the two discussing her namedrop of his song, "Famous." Taylor's issue: being called "that b*tch."

This is what Taylor posted several hours ago:

That moment when Kanye West secretly records your phone call, then Kim posts it on the Internet.
A photo posted by Taylor Swift (@taylorswift) on Jul 17, 2016 at 9:14pm PDT

In case you need it all laid out in bullet point form:

– In Kanye West's song “Famous”, he says he and Taylor “might still have sex” because he “made that bitch famous”

– Kanye claims Taylor knew about the song and gave him her approval
– Taylor claimed that she never gave Kanye her approval, calling the song “misogynistic”
– Kim called Taylor a liar in an interview with GQ, and said that Kanye had video proof of Taylor giving her approval
– Kim releases said video on Snapchat for all the world to see; shit hits the fan 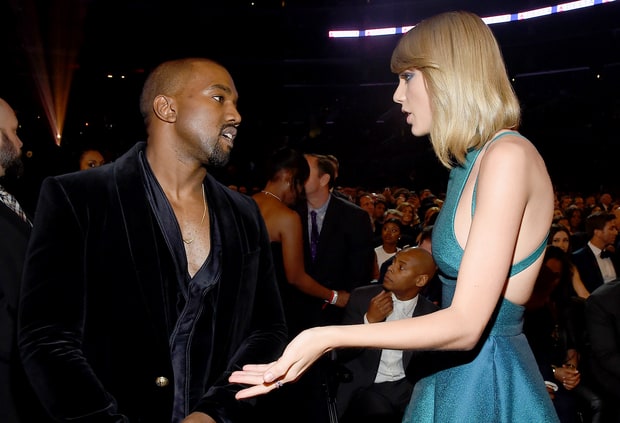 Here is a video wrap up in case your head hurts:

“Where is the video of Kanye telling me he was going to call me ‘that bitch’ in his song? It doesn’t exist because it never happened,” Swift, 26, wrote on Instagram on Monday, July 18. "You don’t get to control someone’s emotional response to being called ‘that bitch’ in front of the entire world. … He promised to play the song for me, but he never did. While I wanted to be supportive of Kanye on the phone call, you cannot ‘approve’ a song you haven’t heard.”


You can read the full transcript from Kardashian’s Snapchat videos below:
Kanye West: “Oh OK, dope, You still got the Nashville number."
Taylor Swift: "I still have the Nashville um, area code but I had to change it."
KW (reading his “Famous” lyric): “For all my Southside n---as that know me best, I feel like me and Taylor might still have sex.”

TS: “I’m like, this close to overexposure.”
KW: “Oh, well this one is … I think this is a really cool thing to have.”
TS: “I know, I mean it’s like a compliment, kind of.”
KW: "What I give a f--k is about is just you as a person, and as a friend."
TS: "That's sweet."
KW: "I want things that make you feel good. I don't wanna do rap that makes people feel bad.”
TS: “Um, yeah, I mean go with whatever line you think is better. It’s obviously very tongue-in-cheek either way … And I really appreciate you telling me about it, that's really nice."
KW "Yeah, I just have a responsibility to you as a friend … Thanks for being so cool about it."
TS: “Well, thanks, yeah. I really appreciate it. The head's up is so nice. … Even asking or seeing if I'd be OK with it. I just really appreciate it. I never would have expected you to, like, tell me about one of the lines in your song.
TS: "And the flowers that you sent me, [In September 2015, the “All Day” rapper gifted Swift with a giant bouquet after she presented him with an award at the VMAs, officially putting an end to their feud after he interrupted her acceptance speech at the 2009 awards show.] I Instagrammed a picture of them, and it's the most Instagram likes I've ever gotten. It was like 2.7."
KW: Relationships are more important than punch lines, you know?
TS: "Yeah, I mean, I don't think anybody would listen to that and think, like, oh that's a real, that's a real diss. Like, she must be crying.”
TS: "You've got to tell the story the way that it happened to you and the way that you experienced it. Like, you honestly didn't know who I was before that. It doesn't matter if I sold 7 million of that album before you did that, which is what happened, you didn't know who I was before that. It's fine.”
TS: “… And I have the idea to do it and I create these things and concepts. Like, I'm always gonna respect you.”
TS: "And I'm really glad that you have the respect to call me and tell me that as a friend about the song.”
TS: "It's just like a really cool thing to do and a really good show of friendship so thank you.”
TS: "And, you know, if people ask me about it, I think it would be great for me to be like, look he called me and told me the line before it came out. Joke's on you guys, we're fine.”
TS: "You guys want to call this a feud, you want to call this throwing shade? But right after the song comes on I'm gonna be on a Grammy red carpet and they're gonna ask me about it and I'm gonna be like, he called me.”
TS: “… Are gonna be like, yeah she does, it made her famous. You know, but it's more provocative to say like still have sex."
TS: "It's not, it doesn't matter to me. There's not like one that hurts my feelings and one that doesn't."
Who else weighed in?
Selina Gomez.
"There are more important things to talk about…"
"Why can't people use their voice for something that f--king matters?"
Then she followed it up with two more tweets. "Truth is last thing we need right now is hate, in any form,"
"This industry is so disappointing yet the most influential smh."
And more.
Chloë Grace Moretz, who previously had a run-in with Kim, expressed her opinion. "Stop wasting your voice on something so petulant and unimportant," she wrote. "Everyone in this industry needs to get their heads out of a hole and look around to realize what's ACTUALLY happening in the REAL world."
Khloe replied by posting an explicit pic of a woman in a bikini, who looked like Moretz, with her butt exposed. "Is this the a hole you're referring to @ChloeGMoretz ???" Khloé, 32, wrote.
"@khloekardashian fact check: first photo is me filming my movie Neighbours 2, the second photo is some girl who was wrongfully photographed," Moretz replied.
My head hurts.