Okay. So I’m not necessarily a car enthusiast but I am here to dispel any myth that women can’t be enthusiastic about a new car. They can! I am! And logging onto the site www.buildthecommodore.com.au and registering my interest in helping to unveil the new VF Commodore is the first step in being a big part of the unveiling of this new, highly anticipated Commodore model.

The social media-driven campaign by Holden is a clever one, and taps right into the way we communicate today. Clues are teasingly revealed to participants in the competition – and you’ll see when you register – are led onto a fun trail where discovered puzzle pieces are slowly revealed. 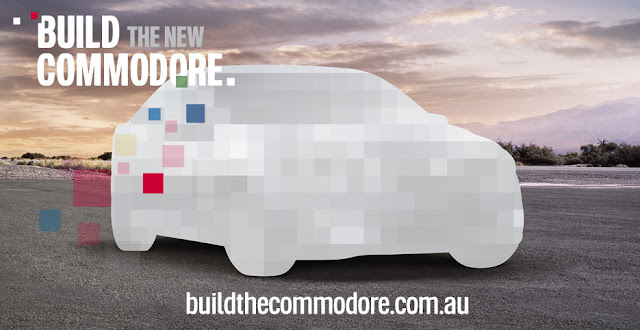 The campaign centres around the VF Commodore big ‘reveal’. The VF Commodore will actually be officially launched in Australia in mid-2013 (I know, exciting! And so far, yet so close!), though Holden is giving us a taster by using the new VF Commodore in the Nascar in February (this month!), even though Holden will still not release all details about the car until its mid-year release.

The comp is perfect for savvy social media sleuths: Holden will run a promotion where pictures of small pieces of the new Commodore VF will be hidden in the main Australian capital cities, and online. Everyone that signs up to www.buildthecommodore.com.au and finds a clue will be in the draw to win the new VF Commodore. Oh yes! One of the very first off the Holden production line could be yours just by entering.

And every single time someone finds a coveted clue – a picture - the image is displayed on the competition ‘microsite’, and the car will start to be revealed. Kinda like a jigsaw puzzle for grownups, and infinitely more fun. As any Commodore aficionado will tell you – and there are scores of them around the country and the globe – wondering exactly what the new release Commodore will look like is the most exciting part.

Crack the clues, find a piece, take a photo with your smart phone and then submit it. That very piece of the puzzle is then revealed on the site moments later. Each person that uploads a photo to help build the VF is entered into a draw to win one of the first one off the production line. The more pieces you find, the higher your chances of winning it.

The competition will run from February 6 2013 to February 10 2013. Then, on Sunday February 10, there will be a live stream of the car reveal on the official Holden YouTube Channel – see http://www.youtube.com/user/HoldenAustralia?feature=gb_ch_rec

Clues of where the pieces will be hidden will be updated daily on www.buildthecommodore.com.au and there will be a total of 101 hidden pieces - 32 in the ‘real world’, and 69 in the digital space.

So, what are you waiting for? Sign up now at www.buildthecommodore.com.au and be a part of Holden history, part of the VF Commodore heritage.
Posted by Josie at 22:38