The Aussie PRs behind the E! show 'Burning Love' sent me a preview first episode of the hilarious new show, and as soon as I popped it on I was hooked.

Which is no surprise - considering I am also inexplicably hooked to 'The Bachelor'. I will let that confession sit there for a minute...

This series - with actor Ben Stiller as one of the executive producers - is LOL funny, and darn 'authentic' because there are several dental hygienists, a kindergarten teacher, and someone determined to marry... anybody.

In this hilarious spoof of reality dating shows [though most obviously a nod to 'The Bachelor'], viewers watch as Mark dates a bunch of carefully selected bachelorettes, eventually narrowing the field to one lucky woman.

To name a few, there is: Titi, the wealthy fashion buyer; Destiny, the intense child psychologist; Annie, the optimistic kindergarten teacher; 84-year-old Agnes, and Lexie, a District Attorney who cites ‘Fatal Attraction’ as her favourite film. 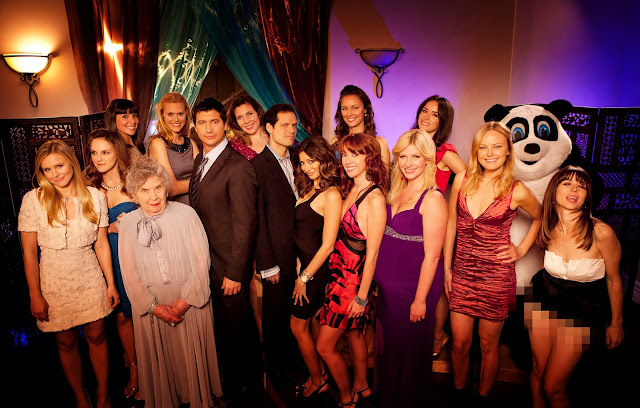 Then there are the challenges: from standup comedy challenges and pool parties, to bubble-bath dates and roller skating outings, it's an, er, emotional roller coaster.

This hilarious series features an impressive lineup of comedic actors from film and TV, including Kristen Bell, Adam Scott, Malin Akerman and Michael Ian Black, and includes special appearances from Ben Stiller, Christine Taylor, Ken Jeong [hysterical, truly], and... Jennifer Aniston. You have to watch to see her fun cameo...