Kevin Rudd has emerged as a "master blender" at a Twinings nationwide competition to create the perfect cup of Aussie tea, and now Mr Rudd - a self-confessed tea aficionado - has won the right to have his own special flavour sipped by all of Australia.

And as the winner of the challenge, Mr Rudd chose the RSPCA as the charity to receive 10c for each Australian Afternoon Tea packet sold.

Today, Mr Rudd hosted a morning tea on the grounds of Sydney University for attendees to savour the new brewed drop.

"It was a cocktail of Irish Breakfast, Russian Caravan and Orange Pekoe. The guinea pigs were my staff," said Mr Rudd. "The win is a win for Australian animals.
"It's good to know you've had a cup of tea, when you've had a cup of tea," said Mr Rudd, who wanted the tea to be strong and drinkable with milk. (Perfect... just as a like it).
"I entered the competition because I thought it was a great opportunity to raise some extra cash for the RSPCA. I hope people like it. I certainly do."
Mr Rudd was part of 65 Australian celebrities who took part in the challenge. Broadcaster Alan Jones, TV host Kerri-Anne Kennerley and her husband John, former world surfing champion Layne Beachley and singer John Williamson were among the finalists.
Here is a photo from the day - Kevin Rudd and I at the morning tea. 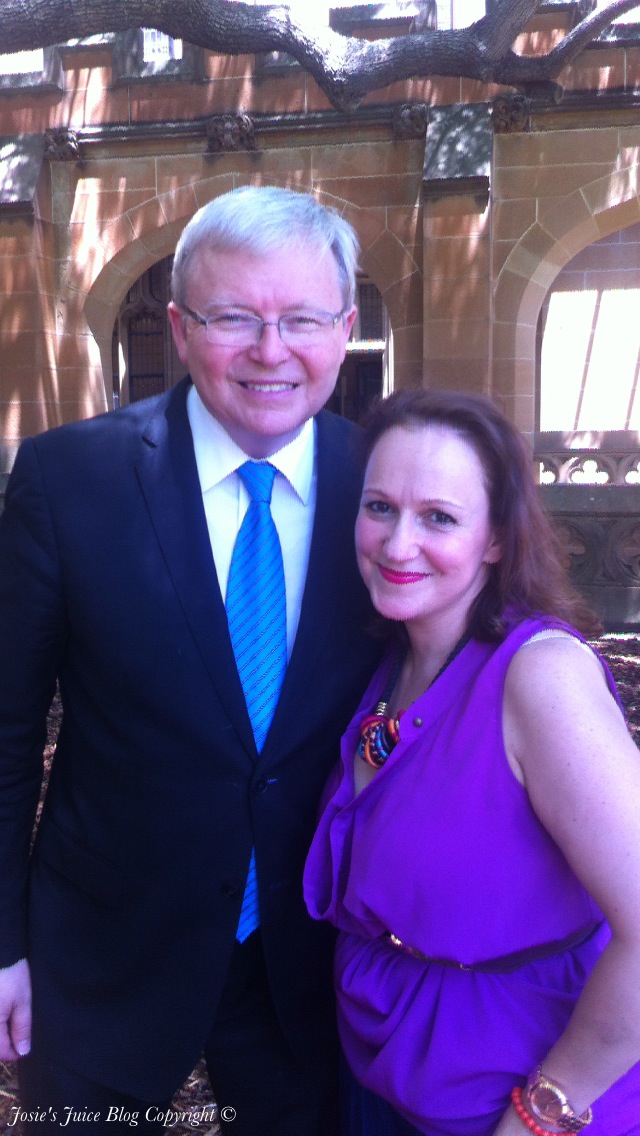 As I was leaving my home for the event, I expressed via Twitter my delight in meeting him later that day. He graciously replied. That was fun.
Even lovelier was the friendly banter we exchanged at the event; I asked about his only grandchild Josephine, and told him I love her name (ha!).
He said she was an absolute joy to be around, and had just Skyped with her - and his daughter Jessica Rudd - earlier that day.
For more on the tea, click here.
Posted by Josie at 18:03

Email ThisBlogThis!Share to TwitterShare to FacebookShare to Pinterest
Labels: Australiana, Drinks, Politics, This Just In