Antonella Gambotto-Burke, writer and author, spent her pregnancy wondering whether she had it in her to love her child "as deeply as she did sparkly Prada mules." And then she heard her daughter’s cry. This was the turning point of her life.

Of her new book titled 'Mama: Dispatches from the Frontline of Love', Antonella says she found the sense of love – of relief – almost indescribable. And, once stitched and bathed, she began to experience an ecstasy that carried her throughout the first year, an ecstasy that did not (as midwives warned) dissipate within a fortnight, but which only increased in fervour as the (physically exhausting) weeks rolled on. 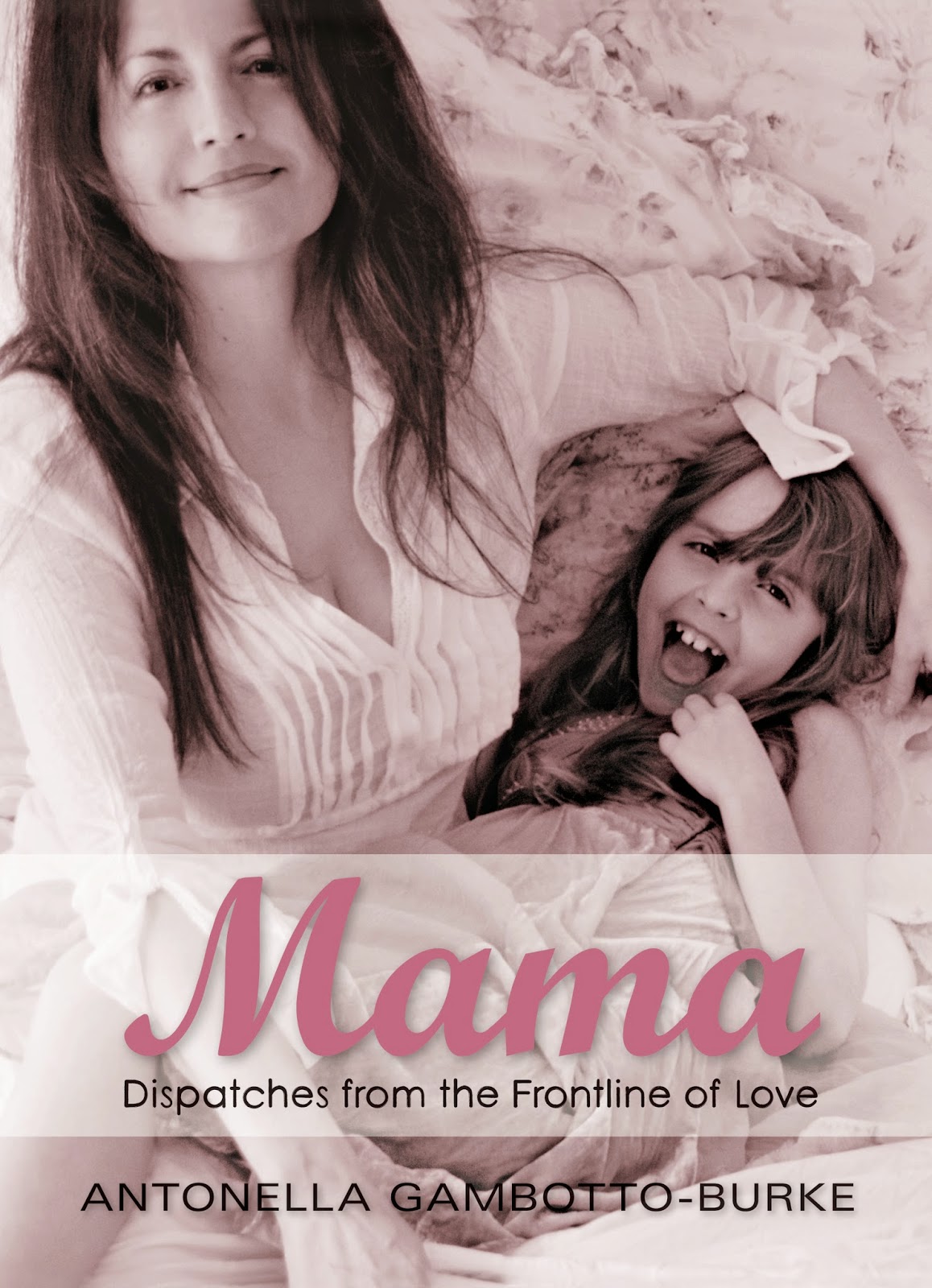 Antonella became what we now deem an 'attachment parent'. She also started writing about her baby, and she kept writing, even when her marriage threatened to shatter under the weight of sickness, bereavement, family pressures and the global financial crisis.

With an introduction by renowned obstetrician and father of the practice of water-birthing, Michel Odent, 'Mama' includes in-depth interviews with some of the world’s leading childcare experts, including Steve Biddulph (on the outsourcing of care), Sheila Kitzinger (on birth and sexual love), Lysa Parker (on attachment parenting and the role of parenting in preventing societal violence), Gabor Mate (on the centrality of early childhood experiences in relation to the brain) and Laura Markham (on connection and parental responsibility using generosity and empathy rather than punishment).

Antonella Gambotto-Burke is the author of five books, and a contributor to titles including Vogue, Elle, Harper’s Bazaar, Rolling Stone, The Weekend Australian, and The Globe among others. Married since 2005, Antonella is the doting mother of Bethesda.

Here is the Josie's Juice interview with Antonella.

I read the part about Bethesda meeting your father and it moved me so much. How do you feel now about the estrangement that preceded it, and how does Bethesda refer to her nonno today?

The estrangement was life-saving. My father was raised in a small town in Piedmont and profoundly disturbed by both his experience of WWII and by parents who resorted to violence to control their children. His father used a belt. My father was ill-equipped to be a parent. I left home at sixteen, my brother committed suicide in 2001. Our family was an unhappy one. Lots of scars.

Bethesda has no recollection of her grandfather, but I am glad they met. There was a sense of completion in their meeting, a closing of the circle.

"All mothers need to be nurtured while they're learning to love their babies". I love this concept, and it flies in the face of that whole 'body after baby' celebrity bikini shot craze. Tell me more about your concept of nurturing.

We complain that mothers abandon their babies without addressing the disgraceful lack of community and cultural support for mothers. So many new mothers find themselves essentially abandoned in the suburbs, shocked into incomprehension by the enormousness of the task before them. Our bodies have undergone a metamorphosis, our hormones are running riot, our partners are at work, many of us have little or no family support due to any number of reasons – work-related geographical distances, dysfunction, and so on – and there is a baby, needing to be nurtured. And if we've been emotionally wounded by our own experiences of infancy and childhood, it can be disastrous. To cope with the fear, we start trying to regain mastery over our lives in any way we can – struggling to pummel our bodies into shape, returning to work when we don't have to (if we don't have to). We do this because to be a mother is to be without status in this culture. At the most vulnerable time of their lives, mothers are repeatedly failed by the community.

I became an attachment parent via instinct rather than design, breastfeeding and co-sleeping because it felt like the right thing to do. (Having said that, co-sleeping is not recommended for all mothers. I have a piece about it on my website.) My take on nurturing is this: we all have different capacities for intimacy and different lives. I don't believe in prescriptions. What interests me is increasing the degree of attachment between mother and child, father and child, mother and father, parents and community. We have to turn away from the materialism that is eroding our culture and question our priorities. This is one of the gifts my daughter gave me: she inspired me to question my priorities.

"We need to stop seeing care-giving as a woman's issue." I love that you bring that up. Tell me more about that?

We understand babies as exclusively a mother's responsibility, which is, in many cases, why fathers find it so easy to walk away from the mothers of their children. We marginalise men. We need to open a dialogue with the fathers of our children about accountability and about love and about respect. We need to involve them. We need to redefine what it is to be a successful man. We also need to demand respect as girls, women and as mothers. Pornography has had a toxic impact on our culture in terms of the respect accorded to women. As Melinda Tankard Reist noted, boys are being conditioned to understand girls and women as little more than sexual service stations.

We need to rally around young and new and dysfunctional parents in particular, and, rather than encourage fracturing couples to split and “get their groove back”, see if there is a way of helping them stay together. Steve Biddulph observed that only a third of the couples he sees really needed to split; the others just hit a speed bump in the relationship. But these are the times of the greatest growth. We need to start celebrating attachment, rather than emphasising independence.

"Motherhood has taught me that success rests in the surrender to joy." Tell me about some of your most joyful moments with Bethesda.

The most recent? I was clambering out of a cab; Bethesda, who is now eight years old, was talking to a group of her girlfriends further up the road. On seeing me, she cried out, “MAMA!”, ran towards and threw her arms around me, almost knocking me over. Her friends were left standing there like lemons. I could see the incomprehension on their faces – you know, “Why would anyone be so excited to see their mother?” I'd only been gone for a few hours.

When I think of our most joyful moments, they are really the most simple things. There are so many funny little moments – things she said, things she did. We all used to hold hands together and dance around in a circle to the Madeleine theme. When she was a very young toddler, we used to spend afternoons talking and reading and drawing together. We used to walk together every day, sometimes for over an hour. Little steps, holding hands, chatting about the world. I worked when she slept, so I was always exhausted and usually broke, but also so incredibly happy.

We've just had the most wonderful life together, all three of us. I know my husband, who is significantly younger, feels the same way. My life, in many ways, began with hers.

"My husband was no longer just a man: he was the father of my child." I adore this line. It evokes so much. Tell me what it means to you.

Before I became a mother, I had no idea how deeply bonded it was possible to feel with a man. I was very skittish, very selfish and, in essence, very closed. Motherhood awoke me. The fact that I literally could not have created Bethesda without my husband gave me pause; it made me address him with a gravity that had been absent in my dealings with other men. And he really is the most beautiful person – so strong and so courageous and so profound in his feelings. Our marriage isn't perfect. He is congenitally disorganised and an ogre when he doesn't sleep. As I write in Mama, there are days I would happily trade him for an Alexander McQueen box clutch. But I will always, always be grateful to him for both the love he has brought to my life and for this wonderful child.

Antonella will be reading from her book at this event.

'Mama: Dispatches from the Frontline of Love', by Antonella Gambotto-Burke is available now, through Arbon Publishing ($34.99).
Posted by Josie at 13:47