'Written it Down' - Australian Improv Series

I adore anything Aussie, unscripted, comedic.

This series ticks all the boxes.

The series is from 'A Real Good Kid Production', directed by Dave Zwolenski, and created and produced by Matt Saraceni (@iamnotmatt) and Dave Zwolenski (@davezwol)

Watch the very funny episode one below:


This YouTube clip - subtitled "Delivering bad news is hard to do... especially when you don't know what it is", is part of a series of this completely unscripted new comedy show that puts two people in the ultimate uncomfortable situation without any idea where it's going to go next - improvisation!How good is Stuart Packham in episode 1? And Sophie Miller Chatfield, how you didn't throttle Stuart and/or fall about laughing at his fabulous dribble, I don't know.

Matt answered some questions just for Josie's Juice about the series.

"So the series came about because there's a bunch of comedians who have performed hundreds of hours in Melbourne comedy rooms and I wanted to showcase their (what I think are) amazing improvising skills to a bigger audience. It's also the first collaboration between me and my best mate Dave Z (Zwolenski) as "Real Good Kid Productions". We always talked about making something together, and we finally got our butts into gear and co-created "Written it Down". Here's Dave (centre) and Matt (right) below: 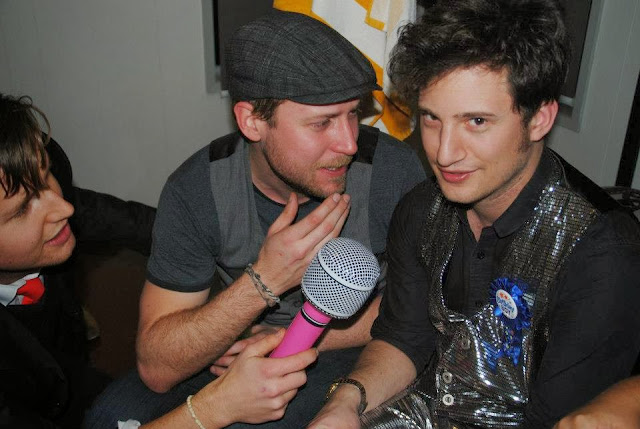 I also asked Matt which TV shows inspire them:

"It's interesting to think about what TV shows inspire us - it would be remiss of us not to mention classic impro television like 'Whose Line is it Anyway?' or 'Thank God You're Here'.

"However, the show grew from the idea that improv on TV doesn't have to be 'Slideshow', and that there is a hugely talented cast of comedians who can "make stuff up on the spot" who don't get to do that on TV because the networks all like a lot of "rules" so that their improv isn't too unpredictable! We just love the idea that from a single sentence our actors get the chance to invent an entire back-story, generate drama and be hilarious in which ever way their brains want!

"The dream would be to see the show live as interstitials on something like ABC2. This was a low budget version done out of a love of improvised comedy and passion the of the actors, but I'd love to see what it could do with some development cash behind it. We have the ideas, just need the production budget!

To watch the rest of the brilliant, very clever (did I mention it's Aussie!) series, click this way.
Posted by Josie at 22:32