How's that for timing?

The new Brad Pitt and Marion Cotillard film called 'Allied' has just dropped on the same day as Angelina Jolie's divorce announcement. You know, THAT one. Oh, you missed it? Read more HERE.

Anyways, the new Pitt/Cotillard movie is about an intelligence officer Max Vatan (Pitt), who encounters French Resistance fighter Marianne Beausejour (Cotillard) on a deadly mission behind enemy lines in North Africa, in 1942.

They're then reunited in London and, well... here is the trailer folks:

With tabloids reporting unsubstantiated claims that Brad and Marion had something happening off set as well as on, the timing of this trailer release is rather clever, don't you think..?


These reports that Angelina's breaking point was a private eye uncovering Pitt allegedly having an affair with Cotillard in real life.

"She hired a private eye because she felt that he was fooling around with her on the set, and it turns out, he was. And that was the final straw," a source said.

If you think history is repeating itself... this:
In 2005 Angelina was accused of being the catalyst in the much talked about breakup of Brad with his then wife Jennifer Aniston.

Ange and Brad were accused of having an affair during filming of 'Mr. & Mrs. Smith'. In 2006, Angelina and Brad confirmed they were in a serious relationship, and got married in 2014.

“She hired a private eye because she felt that he was fooling around with her on the set, and it turns out, he was. And that was the final straw,’’ the source said.
Pitt, 52, had been rumored to have been cozying up to his “Allied’’ co-star Marion Cotillard, 40, for months during the pair’s filming of the World War II drama in London.

The PI discovered that Pitt was cheating on his wife of two years with Cotillard — while also partying like a single guy on a mission, the source said.
“The atmosphere [off-set] was full of hard drugs and Russian hookers, and Angie was told Brad got caught up in it,’’ the source said.
“He’s in the throes of some insane midlife crisis, and Angie is fed up.”
But a source close to Cotillard denied the Pitt affair rumors and insisted she is still with her long-term partner, French actor and director Guillaume Canet.
“They are still very much together. They have been a couple since 2007 and have one child but have never married,’’ the source said of Cotillard and Canet.
The source could not confirm French reports that Cotillard is pregnant with her second child with Canet. 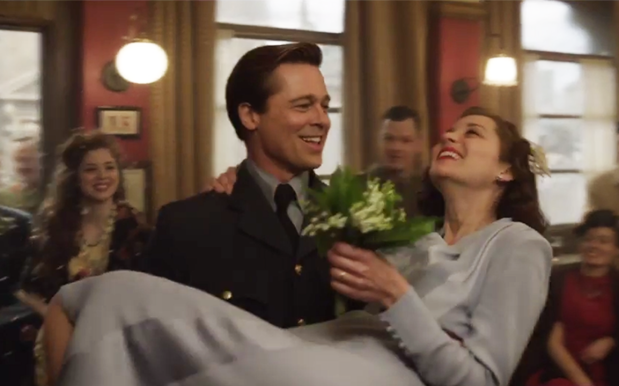