Magda Szubanski to Fiona Nash on Q & A: "Thanks for nothing.” VIDEO

On the ABC's Q & A last night, Magda Szubanski spoke her mind, and rightfully so.

When she and deputy Nationals leader Fiona Nash clashed, well... here is the dialogue:


Drawing on her own experiences, Magda spoke about feeling suicidal when she was 11 and 12, when she thought being a lesbian would mean she’d have an “absolutely terrible life”.
“The difference between LGBTQI people and any other minority is that in every other minority group the family shares the minority status,” she said.
“As an LGBTQI person you are a minority of one within your own family. It is such a precarious feeling.”
She added that she deemed humiliating and denigrating that gay couples could not marry.
“It means you are not considered to be a fully human person,” she said.
“Every time they knock back those bills in Parliament how do you think we feel? We know it’s telling us we’re lesser. That contributes to the lack of self-esteem and the self-harm that LGBTQI people have done to ourselves for decades.”
But it was an exchange with Fiona Nash that got her really fired up.
Fiona was defending the government’s decision to back a plebiscite when Magda appealed to her to think of it from a more personal perspective.
Magda: “One simple question: Do you think I’m equal to you?”
Fiona replied: “Of course I do.”
Magda: “If I was your daughter, and I’m being gay, would you think that I should have the right to be married?”
Fiona: “I’ve been asked this question a lot over the last 12 months and my response was that my view is still the traditional view of marriage. I love my children regardless of what they ever brought home for me would make absolutely no difference at all. I completely respect your view and your desire to see that as equality ...”


Magda: “But you won’t give me my rights. Thanks for nothing.”
Heartbreaking, really. If you have a heart.
Here is the whole episode, with the plebiscite argument the first chat to take place on the show: 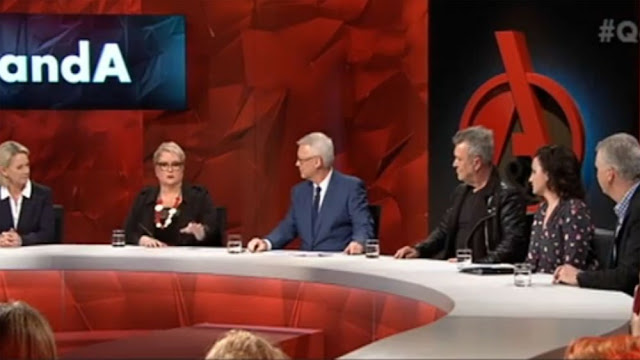 Email ThisBlogThis!Share to TwitterShare to FacebookShare to Pinterest
Labels: Australiana, Everyone is talking about, Gay Matters, Marriage, Marriage Equality, Q and A, This Just In