The new cover for the 'New York Post' has just landed and... oh wow.

The US newspaper has pulled no punches when it comes to their just released cover... Jennifer Aniston in an old photo 'laughing' at the demise of 'Brangelina' aka her ex husband Brad Pitt and his wife Angelina Jolie, following Angelina's decision to divorce Brad. Read more about that HERE.

Back to this cover. 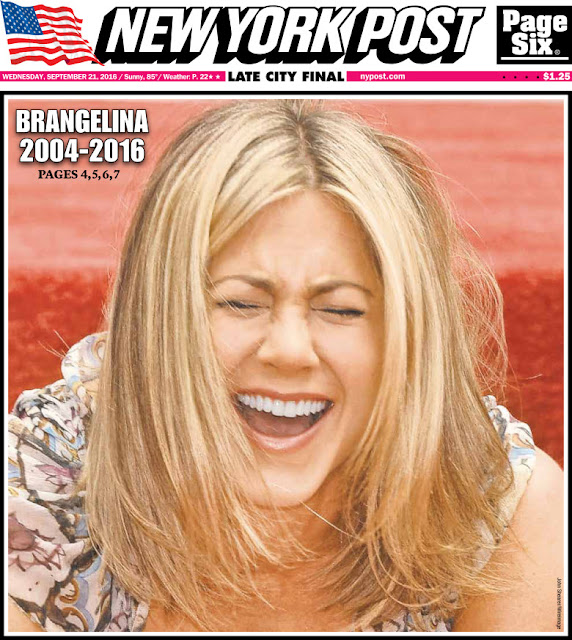 In the accompanying article, it says:


Jennifer Aniston knew it was just a matter of time, pals told The Post on Tuesday.
While the showbiz world was shocked by the news of her former hubby Brad Pitt’s split from Angelina Jolie, “Jennifer always knew that this day would come,” said a source close to the “Friends’’ star.
“Everyone in Jennifer’s inner circle regards Angelina as a crazy master manipulator,” the source said. “But we all presumed the end of their affair would be Angelina leaving Brad for someone else.”

The source added that Aniston isn’t gloating about her ex’s divorce, even though Jolie allegedly stole him away from her while she and Pitt were still married.
“Jen still cares about Brad and wishes him well,” the source said. “She has moved on and is really happy with [hubby] Justin Theroux.”
Posted by Josie at 22:29

Email ThisBlogThis!Share to TwitterShare to FacebookShare to Pinterest
Labels: Everyone is talking about, Hollywood, Sad, This Just In