'Australia's Next Top Model' is baaack!

And here at Josie's Juice there is unashamed excitement.

Look at this... how can you not be? Jennifer Hawkins's brains and beauty, Alex Perry's wit and one liners, Megan Gale's grace and smarts... plus, oh yeah, the model contestants. I have long been a fan of this show, and now, into season number 10! 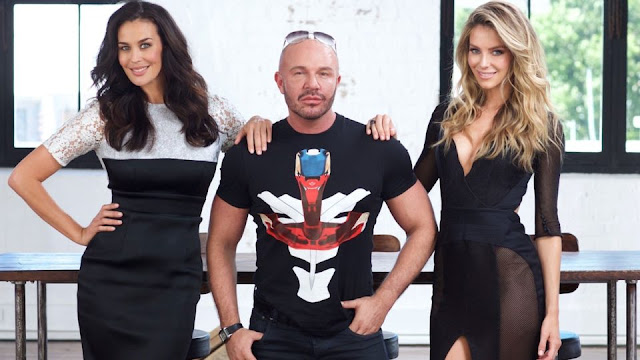 And so, after an extensive nationwide audition tour, thirteen hopeful young girls have been chosen to star in this tenth series of Foxtel’s landmark reality series, 'Australia's Next Top Model'.

To celebrate the milestone tenth season, iconic Australian Supermodels Elle Macpherson, Gemma Ward and Miranda Kerr have all been enlisted to guest star throughout the series (yassss... we LOVE supermodels here! Obsessed, even. Together, they will share their decades of wisdom and experience with hands-on coaching, through the toughest photo-shoots in the shows ten year history.

Joining them, to acknowledge the show’s influence in creating their incredibly successful careers, will be some of Australia’s Next Top Model’s most popular and successful models from seasons past. They include Montana Cox (Series 7), Simone Holtznagel (Series 7), Amanda Ware (Series 6), Cassie Van Den Dungen (Series 5) and a massive grand finale featuring over forty returning contestants.

Judge for all ten seasons, Alex Perry said: “Ten years is a lifetime in the modelling industry, so to have survived let alone thrived, is such an honour for Australia’s Next Top Model. It’s fantastic and a very proud moment to be celebrating ten seasons of such an iconic and landmark series. When we first started filming in the Foxtel studios in Sydney in 2004, none of us could ever have imagined the show would grow to launch so many modelling careers.

“It’s been a thrill to have worked with hosts Erika Heynatz, Sarah Murdoch, Jodhi Meares, Jennifer Hawkins and of course our dear, irreplaceable Charlotte Dawson, to whom so much of the of the show’s success is attributed to. Over the years we’ve shared plenty of laughter, tears, outrageous moments and a love of producing great fashion imagery.

“This season we welcome the gorgeous Megan Gale, who next to Jennifer Hawkins, will provide one of the most dynamic judging panels we’ve ever assembled. Megan and Jen bring great heart and commitment to the show. It’s a wonderful combination that also equals exceptional glamour to the 10th anniversary.”

To ensure the contestants are fully prepped for the judges each week, two of the world’s hottest male models, Australian twins Jordan and Zac Stenmark, will work beside returning mentor Cheyenne Pozzi (another JJ fave!), guiding them through the gruelling challenges, and transforming them into highly respected working models.

The winner of Australia’s Next Top Model will receive a 12 month modelling contract with Priscilla’s Model Management, and will feature in an editorial spread for leading fashion magazine, Elle Australia. They will also get $20,000 trip to New York during Fashion Week, and drive away in a stylish Mazda.

Excited? This will get you there:

And of course: Alex Perry... his one liners really are everything:

A sneak peek at some of @alexperry007's classic one-liners on #AusNTM
A video posted by Australia's Next Top Model (@ausnexttopmodel) on Sep 17, 2016 at 11:51pm PDT