'The Shire': Sophie and Vernesa. What's the appeal?

‘The Shire’ – the Network Ten TV ‘dramality’ [geddit, drama + reality] show… it had all the makings of a controversial show, right from the outset.


From the teaser trailers released by Ten [featuring, amongst others, Sophie and Vernesa; see more here: http://josiesjuice.blogspot.com.au/2012/07/shire-australias-jersey-shore.html], to the pics on the show’s Facebook page, to TV commentator reviews [not to mention the early outrage expressed by the Shire’s Lord Mayor], it was always going to incite social media mayhem. And yes, the Twittersphere went nuts last night.

But as Deborah Thomas wisely pointed out this morning on Nine’s ‘Mornings’, for the almost 1 million people who did watch it, the rest of Australia’s millions didn’t.

One journo friend who still lives in the Shire said she was offended by the representation of her beloved area. I understood: I still proudly live in the West, and if camera crews came around and showed only the stereotypes of the area [poverty, crime, etc] I’d want to tell the world the precinct I live in is pretty darn fabulous.

Despite the overwhelming negativity, there’s one thing we can bank on: of the close to 1 million people who did watch, around that amount will watch it again next week. Those who did not watch it last night will be tuning out just so they can, well, bitch about it too.

The most intriguing characters, the ones garnering the most discussion this morning, were Sophie and Vernesa.

Augmented to within an inch of their lives, the spray tanned, pneumatic-boobed duo [who call each other ‘wifey’, and are proud of how they look], elicited much of the negative comments.

And so I did what most women would’ve done in the comfort of their lounge rooms, with tracky daks on: ask their partners if they found these women attractive. I can pretty much predict my husband’s answer ["ahhhh… NO!"], but I wanted to widen the net and ask the best barometer I have [short of going out, Dave Hughes-style with a mic to gather vox pop style sound bites]: ask my friends on Facebook.

Guys and girls responded, and much of it [okay, all of it] was negative.

Said Joe: “If they’re not careful there gonna knock each other out,” referring to their big breasts. “Honestly Josie, they do nothing for me. Fake bimbos.”

Added Anthony: “Absolute rubbish if you ask me... These women are so fake, and the show was pathetic. People all around the world are gonna watch this and think this is what Australians are like.”

One word summed it up for Rob: “Fake.”

“That much "fakeness" is a turn off,” added Anthony.

Anna conducted some ‘market research’ for me, asking her partner: “He just looked at them and said, “I wouldn't put them next to a candle; they'd probably melt.”

Laura also asked her partner about the girls’ appearance: “Fake, vain, over done, ugly and a complete turnoff!” he said.

Leah added her own perspective: “If they weren't being validated in some way by those around them, they wouldn't keep it up. One wonders at their role models too,” she added. And suddenly I felt extremely guilty for writing posts about the Kardashians…

Anna then added: “What gets me though is that men consistently say they hate women who look like this. I mean, look at "Snog, Marry, Avoid" (now that show I love. I love a good 'make-over/under!). So, why do women keep faking themselves up? They must be deluded enough to think men like it because who would do this to themselves? Natural beauty always wins out.”

Anthony, a single 30-something year old man, agreed: “It’s like a drug addiction... You need to know when to stop. I don’t mind a little make over, nails, hair, etc.”

Nineteen year old Cass went for the jugular, possibly inspired by a meme already doing the social media round: “KILL IT BEFORE IT BREEDS!!”

Sheree, a Shire girl herself, added: “I can't believe how chav these chicks are. They think they look hot, but they look like trannies.”

Twenty-something single guy David added his thoughts: “If I honestly see girls like this I think one thing... one night stand… I also think: snob and poor self esteem issues... no girl should wear that much make up and have that much plastic surgery!! A guy will wanna marry a girl who is comfortable with her own natural appearance and is happy and confident to be around her husband in trackies and a singlet... I haven’t watched The Shire and doubt I will cause basically it's a stereotype show like Jersey Shore and highlight what is wrong with society and doesn't give a clear indicator of what Australia is really like in this day and age!”

Dan added cheekily: “I'm sure they have lovely personalities.”

So, as baffled as ever as to why some women spend an absurd amount of money on upkeep which is ultimately ridiculed by many, I am no wiser as to what makes Vernesa and Sophie tick.

Anyone? ANYONE? And: will you tune in to ‘The Shire’ next week?


Here are some memes already doing the rounds... 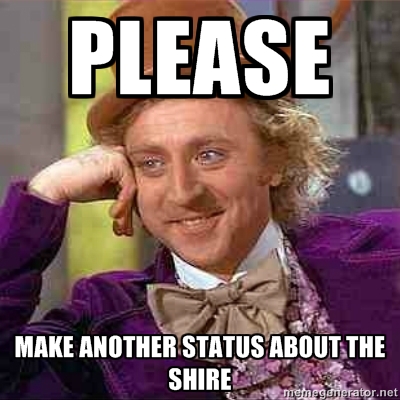 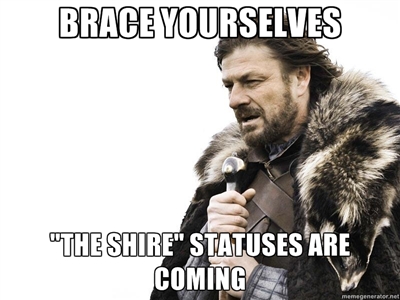