A just-published article by journalist Matt Young has seen the Twittersphere and online comments sections go a little nuts.

Nothing Matt wrote was particularly controversial or outlandish... it was just his opinion.

But some of the responses from the online community have been typical and expected on a topic which often fires people up: gay marriage equality. I am all for it, and the reason is simple: I know and love plenty of gay people and wholeheartedly believe they should have the same rights as the heterosexual community. I also know gay people who have struggled to come to terms with coming out to family. I would bet that those who oppose everything related to issues concerning the gay community don't have a son, or brother, or cousin, or niece or nephew who have gone through turmoil. Maybe if they did they'd understand their plight far better.

I know Matt well - we worked together up until recently - and I called him today to ask about the reaction he has received so far. He's a little gobsmacked at the responses, in both a positive and negative way. Here's lovely Matt, below: 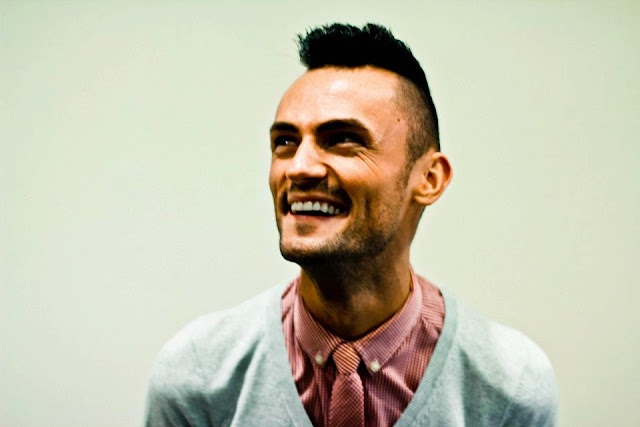 He tells me he wrote the article after he discussed the topic with his editor at news.com.au.

The article in question is titled "Open letter to Prime Minister Julia Gillard on gay marriage," and the links are below, from both The Punch and news.com.au

Here is an excerpt from the piece:

Dear Prime Minister,
I write to you as a tax paying citizen, a brother, a son, an uncle and a member of the homosexual community frustrated with our politicians’ lacklustre stance on the rights of gay and lesbians in our fair nation. On both sides of the political fence, that is.
News that the US states of Maine, Maryland and Washington State legalised gay marriage on Tuesday cemented the notion that Australia is well and truly behind the eight-ball. Ten states in the US now recognise same-sex marriage.
Globally, Argentina, Belgium, Canada, Denmark, Iceland, Netherlands, Norway, Portugal, Spain, South Africa, and Sweden also recognise our legal right to wed.
How many states in Australia thus far? Zero.
Sadly, I didn’t feel much when I watched Big Brother 2012 winner Benjamin Norris propose live on air to his partner last night. It’s a nice gesture, but unless they move to Buenos Aires, it’s not going to happen.
I grew up in a middle-class neighbourhood in the Christian threshold of Sydney’s north-west suburbs. When I was in school, I was bullied to the point that I couldn’t turn a corner without someone screaming out “faggot” or “poofter”. My agriculture teacher used to make a mockery of me in front of the other boys, once telling me that to fit in, I needed to lower my voice.
Life was pretty tough back then. As a fourteen-year-old kid, I was still trying to figure out my own identity and sexuality while dodging sausage rolls that would be thrown at me from the field. I learnt to keep my head down and show no fear in the face of ignorance and hatred.
Now, this is what I ask of you, Prime Minister. Show no fear. Right now, you’re our hope, Julia. We need you to stand tall, speak up and make a difference.
You can read Matt's full article here on The Punch, and read through the comments. Some are explosive: http://www.thepunch.com.au/articles/Dear-Julia-follow-Obama-and-let-me-marry-the-man-I-love/
And you can also read the abridged piece here: http://www.news.com.au/national/open-letter-to-pm-gillard-on-gay-marriage/story-fndo4eg9-1226512889769
Also, you can follow Matt Young on Twitter: @the_mattyoung

Matt directed me to his Facebook page, where he has cut and pasted a comment from one reader. He tells me: "It moved me so much, and really blew me away."

Feel free to leave comments below: 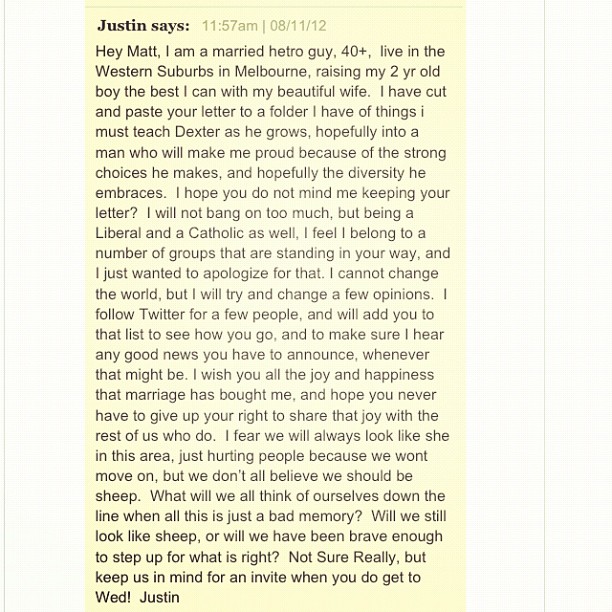