This picture of a Victoria's Secret model at the recent fashion parade has caused furore among parts of the Native American community. 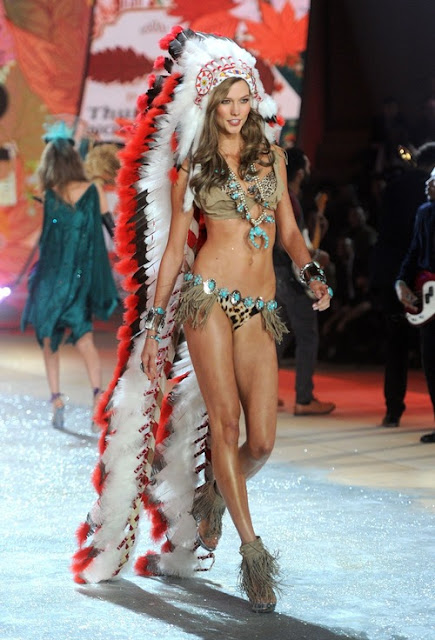 
At the parade just a few days ago, Kloss strode down the catwalk in New York City, sporting a leopard print bikini, turquoise jewellery to complement, and fringed heels. To top it off, a Native American-style headdress was atop Karlie's head.
Following the show, Victoria's Secret Facebook page received many posts criticising the headdress. In response, Victoria's Secret released a statement:

"We are sorry that the Native American headdress replica used in our recent fashion show has upset individuals.

We sincerely apologize as we absolutely had no intention to offend anyone.
Out of respect, we will not be including the outfit in any broadcast, marketing materials nor in any other way."

I'm Sicangu Lakota enrolled in the Rosebud Sioux Tribe. The VS fashion show featuring Karlie Kloss wearing a headdress was extremely offensive to me as a Lakota woman. In our culture, headdresses are worn by those who have done great deeds for our people or community. Typically veterans or tribal leaders wear headdresses and only on special occasions. It's not a costume or something fun to wear around. Although I'm Lakota, I would not wear a headdress unless I have earned the right to do so within my community. Headdresses are culturally sacred objects, not fashion trends. Eagle feathers are symbols of strength and power. At wacipi (powwow), they are worn and treated with respect. If an eagle feather falls off a dancer, that feather no longer belongs to the dancer. It has to be given away or not used for a year because it was treated carelessly. I once saw a 40-year-old man shed tears because his bustle of eagle feathers fell off during wacipi. Because it was a family heirloom, the community decided to give it back to him, but he couldn't use it in his regalia for a whole year. Headdresses and eagle feathers are sacred things in Lakota culture. When a model in a bikini showing cleavage prances around wearing one (eagle or turkey feather doesn't matter, it's meant to look like the real deal) it's really offensive to us. Each culture has sacred objects. Of course people who are not Lakota or not from a tribe that uses headdresses are not going to feel offended, but I do and my relatives do because this is embedded in our culture. I feel the same way Christians would feel about defacing Jesus Christ or Muslims would feel about flushing a Koran down the toilet. There are some things you shouldn't do, especially when we claim to live in a culturally competent day and age. Some comments on this thread say I shouldn’t be offended because my culture is irrelevant. I will never feel that way, I work hard every day to learn and maintain Lakota culture to honor my ancestors who died trying to pass on a way of life. Even though our culture represents 1% of the U.S. population, I will never quit fighting for what is sacred to us just because people who don’t understand say I should “get over it.” We should be respectful of all cultures and take this as a learning opportunity. We should teach our children this behavior is not ok. This is Native Heritage Month, please honor it by honoring our people and our culture. Pilamaya (thank you)

Funny how so many think the American Indians are being over sensitive. I wonder if this would be the same reaction if next year VS has a bikini clad model dragging a cross down the runway as a stylized interpretation of Christ's walk or maybe the models can wear chains and drag bales of cotton while dancing to Nikki Minaj because that's basically what they did this year to the American Indians with this head dress fiasco. Honestly, i hate PC bull myself, but somethings should be respected.

Im not a full blood Native American... but it's in my family line. I find it sad that there are people making such a big deal out of VS useing a headdress. Are you going to go complain to every halloween store that sells poorly made replicas!? Seriously people!

And I am an enrolled member of the Chippewa-Cree tribe and PROUD of it! I appreciate Victoria's Secrets apology. The bashing and ignorance from these comments is not. We are people just like you, not objects. Please educate yourselves before you pop off at the mouths. I agree the attire was adorable but the significance of headdresses and eagle feathers are that important to our people. We appreciate the gesture whether it was done to hurt feelings or not, but those are for ceremonial use only and you must earn that right of passage to carry or flaunt. I am absolutely flabbergasted at all these racist/hurtful comments! You all should be ashamed of yourselves, we are only trying to protect what culture we have left. Sorry if OUR culture offends YOU and you can't see a white girl walking down a runway with a FAKE headdress that only isn't offensive but completely IGNORANT! We are not costumes to be mocked and made fun. We are proud of our culture! Thank you VS for respecting that!

And the other side of the coin:

There are bigger problems to worry about. How about you who sit and complain about your raped NA women put the energy you're using to shout at VS into something useful like actually HELPING someone. You think this is defending your culture? Shouting on Facebook? What a joke! What a disgrace!

And if you want so badly for everyone to stop disrespecting your culture, how about you spend some time trying to educate them on the details of it, since they knew nothing of what they were doing. I'd say its your fault for not making it a well known fact. Spread the word about something if you really care about it. Don't go around being private and secretive and expect everyone to understand. It's your own fault.

I'm American Indian and I thought it was awesome. People just need to quit being so sensitive over every little thing

And this is not the first time a Victoria's Secret's creation has been perceived as racist.
In September, an Eastern-inspired lingerie piece called "Sexy Little Geisha"stirred controversy.

What do you think about it all?

I say: if someone is offended, they have their reasons to be, and they should not be told to just "get over it." You can't possibly know how someone is feeling unless you are in their shoes. Even if it seems to wrapped up in a pretty bow, Victoria's Secret-style. Good on VS for apologising.