Now, this has to be the best celeb gossip of the day... can you imagine De Niro being pissed with a fellow celeb pal about something?

The story goes like this, according to 'Mercury News':

"Robert De Niro had a bone to pick with Jay-Z.


As his fans know, Jay-Z is a big De Niro fan. He frequently name-drops the iconic actor, from the opening lines of "New York State of Mind" ("Yeah, I'm out that Brooklyn, now I'm down in TriBeCa, right next to De Niro") to "Party Life" ("Sippin' on my vino got me cooler than Pacino and De Niro put together, my real life is like 'Casino'").
But the hip-hop icon got on De Niro's bad side by not practicing proper phone etiquette, according to the New York Post, which reported the two were in a "tense beef" at Leonardo DiCaprio's stuffed charitable birthday bash last weekend.
I hate tense beef.
De Niro reportedly took Jay-Z to task for not returning his calls over plans to record a song for the TriBeCa Film Festival."


Wow. Hate to be on the wrong side of De Niro. To read more click here: 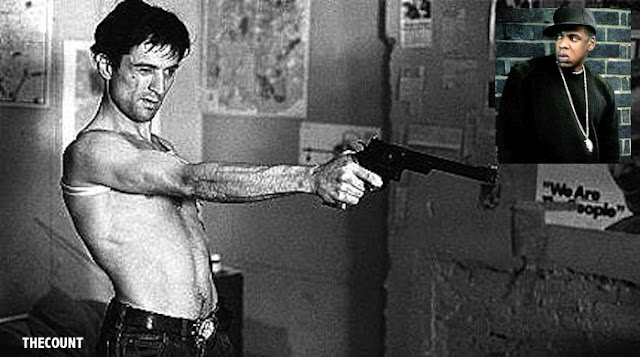 Email ThisBlogThis!Share to TwitterShare to FacebookShare to Pinterest
Labels: Celebrities, Hollywood, This Just In